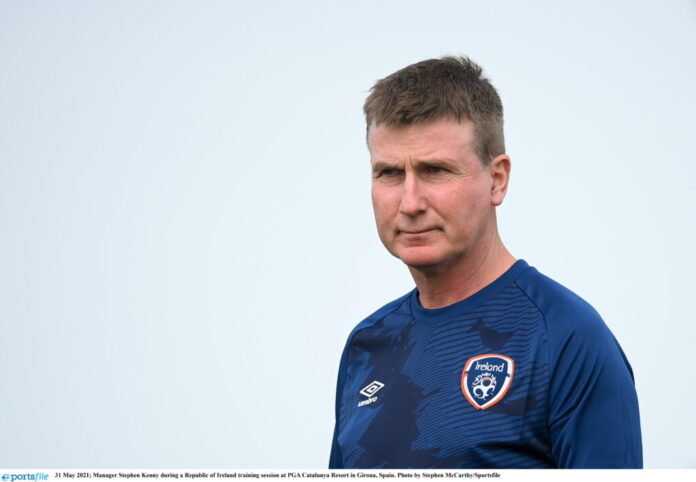 IRELAND manager Stephen Kenny spoke to the media today ahead of tomorrow night’s friendly clash with Euro 2020 participants Hungary in Budapest. Kenny is hoping to build on last week’s 1-4 victory over Andorra which was his first win as Ireland senior manager.

He is delighted that a section of supporters will be permitted to attend the game and also does not foresee a raft of changes to the Irish starting line-up.

“It s terrific to be going into games with supporters as they are the life blood of the sport. The sense of passion around the stadium is so important to players and they feed off the passion. We are not in a position to make wholesale changes as we want a degree of continuity but there will be some changes to the team.”

As previously mentioned, there was a sense of relief as Kenny picked up his first victory against Andorra at the 12th time of asking with Troy Parrott (x2), Jason Knight and Daryl Horgan all scoring their first international goals; a real pleasing aspect for the Ireland boss.

“The positives from it were three players scored their first goals for Ireland. Troy Parrott got off the mark with two well taken goals along with Daryl Horgan and Jason Knight.

We would like a really good performance against Hungary. They rested 8 players last week and I assume they will be at full strength tomorrow night. You can see the emergence of some of our players and they can only benefit from the game tomorrow night.”

When asked about the overall performance of the Irish team during his tenure, Kenny admitted that he would have liked to do better but is very hopeful for the future.

“I would have liked to have done better overall. There is a clear vision of the team that we want to create. We have 13 players who have made their senior international competitive debuts in that period and that’s quite a radical shift. We are creating a stronger squad going forward for the 3 game windows and a team that supporters can identify with.”

The game will kick-off in Budapest at 7pm Irish time.

The post Kenny “Its Terrific to be Going into Games with Supporters” appeared first on Sporting Limerick.