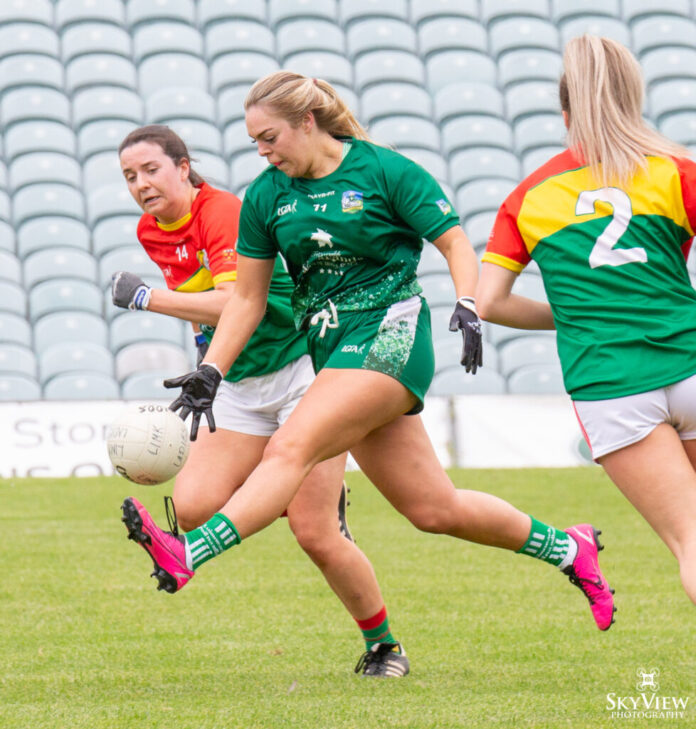 THE Limerick Ladies Football team secured their passage into a league semi final with Leitrim with a 2-7 to 0-8 win over Carlow at the LIT Gaelic Grounds over the weekend. Goals either side of the half were crucial for Donal Ryan’s side as they outlasted a stubborn Carlow outfit on the Ennis Road.

The visitors had a slender lead at the first water break and looked like maintaining that advantage into the break only for Andrea O’Sullivan to grab the games first goal just before the interval to hand Limerick the initiative. Iris Kennelly’s effort shortly after the second half water break gave Limerick daylight and from here Ryan’s side made no mistake in advancing to the knockout stages.

Speaking in the wake of the game, manager Ryan praised the efforts of his side in getting the job done. “We were hugely determined and we ground them down. Carlow were very resolute in defence but we knew we would find gaps because it was hard for them to keep going. Thankfully we got the gaps and got through. I thought we would have driven on more in the end but we got the win and that’s the most important thing.

“It’s a good boost because last week I think we could have won it. And you’re nervous then going into a game after a loss. Credit to the girls, it was hard fought and they deserved it.”

In the last four, Limerick will face Leitrim, who have been one of the more impressive teams across the four divisions. The Connacht girls have won each of their three contests with an average winning margin of ten points as they defeated Louth, Derry and Antrim.

Limerick are the sole Junior side still in with a chance of winning league silverware with Ryan insisting that his team have ‘nothing to lose’ ahead of the semi-final this weekend.

“We have nothing to lose. We are the underdogs, they are roaring favourites going in. We played them in the league last year and they were well on top. We know what we are in for but we are in bonus territory.”

“We are the only junior team, everyone else is gone and we are going in against the big guns. And that’s what we want. We will give it a go and we’ve nothing to lose.”

Despite facing into the game as heavy underdogs, Limerick will be buoyed by their impressive spread of scorers in their two games to date. Five players got on the scoresheet against Carlow with just two of their points coming from placed balls. This came a week after seven players scored in the defeat to Offaly with a newfound emphasis on attacking play among the squad said Ryan.

“We were reliant on one or two girls doing all the scoring so we are trying to open that so we have other girls that can take scores. We need our forwards scoring but also our midfield and our wing backs. So that’s what we have done a lot of work on in training.”

Similarly, the defensive effort against Carlow was equally impressive as Ryan’s charges kept a clean sheet, something which was particularly pleasing to the manager ahead of Leitrim who have scored nine goals in their three contests.

“Our defence have come together and today was the first day we haven’t conceded a goal which is something we really wanted to do as well in closing down the defence.

The winners of the tie will face either Offaly or Louth in the Division 4 decider.