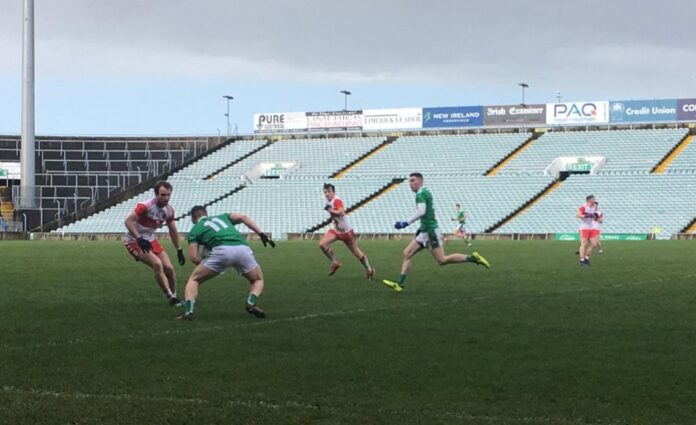 ONE of Limerick or Derry will be promoted this Saturday when the sides meet in the Division 3 semi-finals in Carrick on Shannon.

The tie pits the most winners of Division 4 with Limerick seeking back to back promotions and Derry hoping for two in three years.

The last time these teams met was in the fifth round of Division 4 of the League in the LIT Gaelic Grounds.

Having won each of their first four games, Derry knew a win on the Ennis Road would secure promotion while Limerick had lost two on the bounce having won both of their opening games.

Limerick started brightly and despite missing a scoreable free, Seamus O’Carroll opened the scoring for the hosts shortly after.

Billy Lee’s men moved four clear minutes later as Colm McSweeney’s long delivery went all the way into the net to move Limerick into a 1-1 to 0-0 lead.

Ciarán McFaul got the Ulster side off the board and they should have been level with Christopher Bradley missing a guilt edge opportunity for goal.

Bradley did knock over the next score before he exchanged frees with Jamie Lee. Efforts from Cillian Fahy and Peter Nash extended Limerick’s lead further approaching the half.

Limerick led 1-4 to 0-5 at the break but were pegged back quickly after the restart with Bradley hitting a double. Long range scores from McFaul and Ryan Bell.

The Shannonsider’s chances soon diminshed further as Padraig De Brún received a straight red. A Shane McGuigan double had Derry five clear with Limerick not scoring in the second half until the 65th minute.

A late Karl McKaigue score put the gloss on a 0-13 to 1-5 with Derry earning promotion with a game to spare.

The post Last Time Out: Derry prove too strong for Limerick in bottom tier clash in 2019 appeared first on Sporting Limerick.