Home Soccer Limerick FC LISTEN: “It will be no easy game there” – Anthony O’Donnell looks... 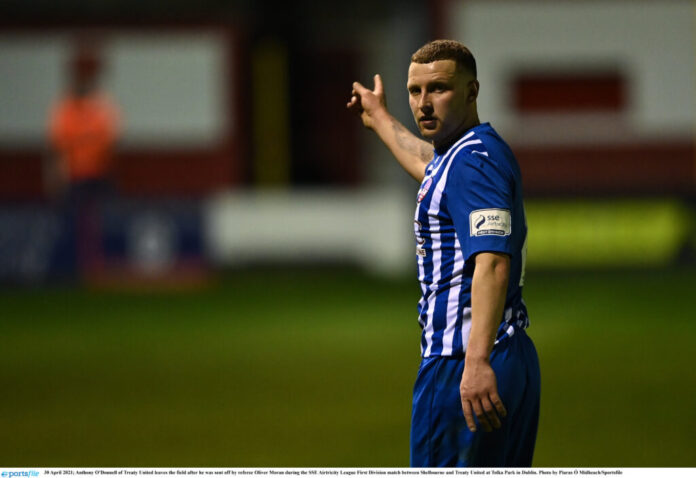 TREATY United rediscovered their winning ways prior to the mid season break against Bray Wanderers as they defeated the Wicklow side 2 – 0 in Markets Field.

The Limerick side were coming off the back of an unexpected loss away to Cabinteeley two weeks prior.

The game was anything but bland, referee Oliver Moran showed two yellow cards to each side and the scores came from Treaty’s William Armshaw in the 86th minute, followed by an upsetting own goal from Wanderers’ centre midfield Mark Byrne in the 88th minute.

Treaty United’s left back Anthony O’Donnell outlined how focused the squad was on getting back into “winning ways” in the lead up to their clash against Wanderers.

“It was very important to us after losing to Cabinteeley to get back into winning ways, we knew we let ourselves down up there. The win against the Wanderers is a big result for us as a team.”

O’Donnell’s back five partnership with Sean Guerins has turned heads within the division as Treaty’s defensive performances remain dominant.

“We’ve a good understanding from playing with each other, we work hard for each other and it couldn’t be going better so far.”

Treaty United will be seeking their first away win of the season as they go on to face bottom of the table’s Wexford F.C. Although the limerick side are confident in their ability, O’Donnell is cautious to not underestimate Treaty’s next opponent.

“We played them a few weeks ago in the Markets Field and they were very good, they played some lovely football. It will be no easy game up there. Results are going their way now and they’re improving every week.”

Treaty United are currently sitting at 4th in the SSE Airtricity First Division, although the Limerick side are definitely in the conversation for playoff spots there is still plenty football to be played before the division really starts to take shape.

To which O’Donnell added,

“We take it game by game, team by team every week and play the eleven men that are put out in front of us every week, that’s all we can do going forward”

The post LISTEN: “It will be no easy game there” – Anthony O’Donnell looks ahead to Wexford appeared first on Sporting Limerick.