Home Sport Gaa “Nothing to lose” – Two changes for Donal Ryan’s Limerick ahead of... 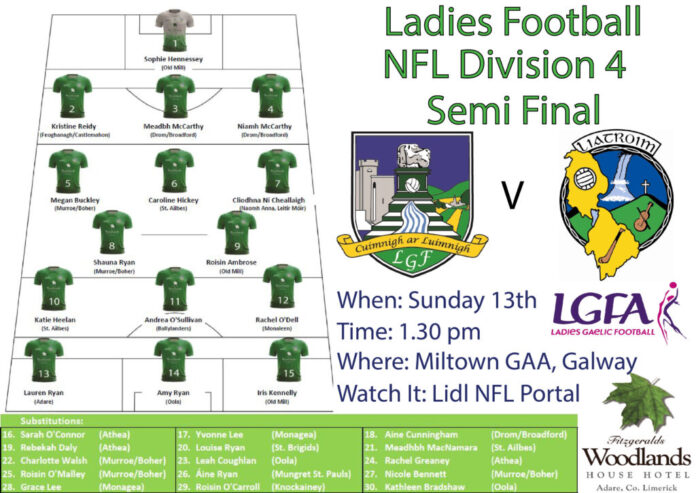 Limerick ladies manager, Donal Ryan has once again made two changes to the starting XV ahead of the Division 4 semi-final clash against Leitrim.

Monaleen’s Rachel O’Dell is named to make her debut on the half-forward line and Clíodhna Ní Cheallaigh comes in at wing-back.

The throw-in for the game is at 13:30 on Sunday at Miltown GAA in Galway.

Louth and Offaly go head-to-head in the other side of the draw.

The Limerick Ladies team are in good form having secured their spot in Sunday’s semi-final with last week’s victory over Carlow on a scoreline of 2-7 to 0-8.

As for Leitrim, they are favourites for this semi-final, having won all of their games up to this stage, including a tally of 5-9 in their last game against Antrim. Limerick manager Donal Ryan is relishing the challenge.

“We have nothing to lose, we’re the underdogs. They’re a very strong team. We’re in bonus territory no, the only junior team left but these are the games we want to be playing.”

If the team are to produce an upset, Donal Ryan knows that they will be looking to improve on the kicking, with the ten wides recorded last week.

“It’s huge, something we highlighted at the start of the year. The wides and our kicking ability is something that we have worked on a bit but we have to work on it more. The evidence is there and it’ll make a huge difference. If we get half of them, that’s another five points.

The game is live on the Lidl NFL portal at 13:30 on Sunday afternoon.

The post “Nothing to lose” – Two changes for Donal Ryan’s Limerick ahead of Leitrim semi-final appeared first on Sporting Limerick.