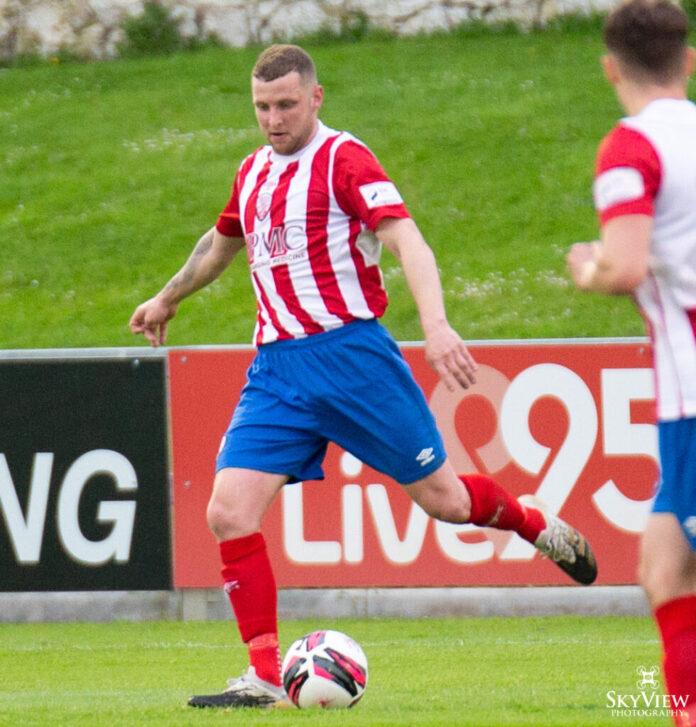 TREATY United picked up their first three points on the road this season with a 1-2 victory over Wexford FC at Ferrycarrig Park. First half goals from Anthony O’Donnell and Jack Lynch cancelled out Kyle Robinson’s early opener for Wexford to earn a valuable victory.

Tommy Barrett named an unchanged side from the victory over Bray Wanderers a fortnight ago with Tadgh Ryan playing behind a defence of Charlie Fleming, Sean Guerins, Anthony O’Donnell and Marc Ludden. Callum McNamara, Jack Lynch and Ed McCarthy formed a tight three-man midfield with both Joel Coustrain and Matt Keane on the left and right flanks either side of Kieran Hanlon.

Wexford have operated a 3-4-1-2 formation under new manager Ian Ryan and it was similar last night with Kyle Robinson and Jack Doherty leading the line for the home side. And it was the former who gave his team the lead in the opening two minutes in what was a disastrous start for Treaty.

With the defence playing a high line, Wexford capitalised on a massive gap between the back four and Tadgh Ryan with Conor Crowley lofting a ball in behind for Robinson to run onto and neatly finish beyond the advancing goalkeeper.

In the opening five minutes, Treaty looked shell shocked but the ever dependable set-piece strength proved vital once more. Marc Ludden whipped in a dangerous corner which was originally cleared but the full-back picked up possession once more and delivered a back post cross which Anthony O’Donnell powerfully headed home despite the best efforts of Jimmy Corcoran in the Wexford goal. It was O’Donnell’s second goal against the South-East outfit this season.

Ten minutes later, the away side took the lead with a brilliantly worked team goal from back to front. Progressive play across the back four was supplemented by two accurate cross field balls by both O’Donnell and Guerins before an overlapping run on the left from Marc Ludden was spotted by Joel Coustrain with Ludden squaring the ball which was mishit by Hanlon into the path of the onrushing Jack Lynch who scored his second goal of the season from close range.

Ian Ryan’s outfit looked susceptible to conceding from corners all evening and Treaty should have extended their lead when Wexford failed to clear another dangerous Ludden delivery and the ball eventually found its way to Hanlon who struck the post with a powerful effort.

Winger Coustrain is always at his most dangerous when cutting inside and the former Shamrock Rovers winger forced Corcoran into a good save as we approached the half-time whistle.

The home side rallied and improved in the second period especially with the introduction of Harry Groome and Evan Farrell who added pace to their attacks. Jack Larkin was introduced as a first half substitution for the injured Charlie Smith and his shot was easily saved by Ryan as Wexford went in search of an equaliser.

As the game became stretched, Barrett introduced two players who have made a real impact in recent weeks in Matt McKevitt and Willie Armshaw. Firstly McKevitt held off the attempted challenges of both Paul Cleary and Fitzgerald before firing wide and Armshaw picked up possession in his own half and positively drove post both Groome and Fitzgerald before shooting wide.

In truth, outside of a couple of late corners, Wexford failed to trouble Ryan in the Treaty goal as they had a fairly comfortable ending to the game at an away venue. The victory now moves Barrett’s charges into third spot, behind second-placed UCD only on goal difference.

Next up for Treaty is an away trip to St. Colman’s Park to take on Cobh Ramblers next Saturday at 7pm.

The post Treaty United Earn First Away win of the Season appeared first on Sporting Limerick.