Home Sport Gaa WATCH: Leitrim prove too strong for the Ladies footballers in the Division... 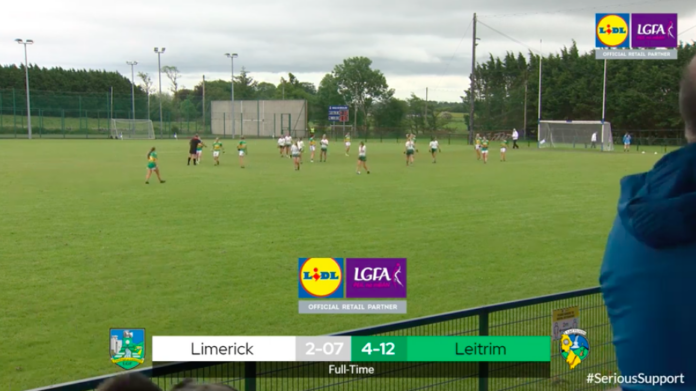 LEITRIM were full value for a 4-12 to 2-7 win over Limerick in their Division 4 National Football League semi-final in Miltown in Galway on Sunday afternoon.

Donal Ryan’s side were made to pay for a slow start that saw the Connacht side lead by 15 points at the half.

Leitrim bagged the opening seven points of the game as they raced into a 0-7 to 0-0 lead. Things would get worse in the 19th minute as Brona O’Rourke hit the net.

Megan Buckley got Limerick off the mark a minute later and Katie Heelan added another shortly after.

But this response kicked Leitrim back into gear with goals from Michelle Guckian and Elise Bruen giving them a 3-8 to 0-2 lead at the half.

O’Rourke grabbed her second of the game six minutes after the restart to put the game beyond doubt.

Ryan’s side continued to press and were rewarded after 47 minutes with Iris Kennelly blasting to the net.

Andrea O’Sullivan then saw her free sail into the top corner as Limerick finished strong with the final four points to reduced the final deficit to 11 points.

Limerick will now turn their attention to the kick off the All-Ireland championship as they play Wicklow on July 11 in the first round.

The post WATCH: Leitrim prove too strong for the Ladies footballers in the Division 4 semi-final appeared first on Sporting Limerick.