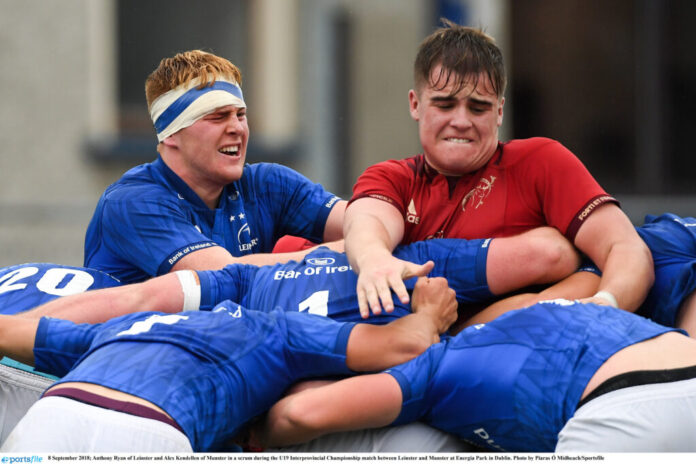 RICHIE Murphy has named his matchday squad for the upcoming U20 Six Nations match against Scotland in Cardiff this afternoon.

The sole Munster representative in the starting is team captain, Alex Kendellen.

Kendellen (20), will feature in the back row in the first Ireland U20 game since just before the pandemic in March 2020.

The Cork native first captained a team when he wore the armband for Presentation Brothers College team in fifth year.

Defence coach and former Munster and Ireland forward Denis Leamy has taken the U20 captain under his wing at camp.

Kendellen spoke of how much work Leamy puts into the coaching.

“Denis has been through it all, I suppose. Firstly, he’s been extremely good to me. Back-row aspects of the pitch – be it ruck, be it tackle, be it poach – he’s taken me under his wing and just showed me that aspect of the game. He kind of wants what he can offer me, I suppose, and what player he can mould me into.”

There’s also three from Munster who make the bench for the side.

Three extra players can be named on the bench due to the condensed nature of the tournament.

“The squad and management have worked tirelessly over the last number of months in preparation for the Six Nations, and the 26 players selected for Saturday have the honour of representing the group against Scotland. We are excited about the challenge ahead and the prospect of the Ireland U20s back in action again.”

The post One Munster player named in Irish U20 starting line-up for Six Nations clash appeared first on Sporting Limerick.