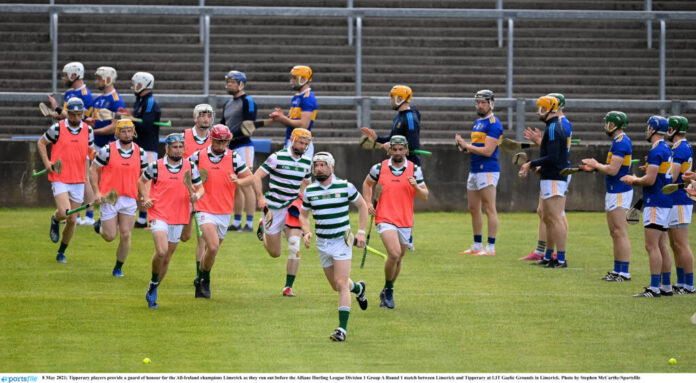 IN a dead rubber league contest, the Limerick hurlers league campaign fizzled out with a comprehensive 3-26 to 0-18 win over Westmeath in Mullingar.

The seventeen point win in Cusack Park saw Limerick leapfrog Cork into fourth in the Group A table on five points, edging the Rebels due to their round four victory in the LIT Gaelic Grounds.

Indeed, Limerick’s next opponents will be the Leesiders who they face on Saturday July 3 on the Ennis Road in the Munster Championship quarter-final.

While not ideal, the League campaign certainly had its positives for Kiely’s side who stumbled through the first couple of weeks before finding their rhythm in time for the Cork clash.

The opening day draw with Tipp was their first game that failed to yield a win since the 2019 All-Ireland semi-final.

The following week, the long undefeated streak came to an end as Galway overpowered the Shannonsiders in Salthill.

In Round 3 Waterford gained some revenge for last year’s All-Ireland final loss defeating Limerick 1-22 to 0-21 in Walsh Park.

However, with a break after the Deise defeat, Limerick purred back into life against Cork, racking up 0-33 in their eight point victory as they looked close to their imperious best that secured All-Ireland, Munster and League honours in 2020.

The Westmeath win was never going to amount to much but it did afford Kiely the chance to further blood some players.

The later duo are in their first year out of the minor ranks and hit the ground running with Coughlan in particular impressing with 0-2 from wing-back in his debut against Cork. Not to be outdone, O’Neill clipped over a brace on the same day having made his debut against Galway.

Richie English was also embedded back into action after his ACL tear in 2020 while clubmate Barry Murphy returned to the fold in the Mullingar win.

Yet, the tried and tested still remains the obvious route for the Shannonsiders as Kiely awaits on the fitness of key trio Sean Finn, Diarmaid Byrnes and Kyle Hayes.

Just three weeks out from championship, focus will now certainly shift to the impending Cork clash on July 3 with Kiely and co full immersed in the challenge at hand as they look to make it three in a row in the province and retain the All-Ireland title for the first time in their history as Kiely said,

“Our group is very competitive at the moment, that’s the way we need to have it for us to be the best we can be. It’s a clean slate now, the league is over. It’s everything on the table on the 3rd of July and we’ll be going after it hard and fast for the next 3 weeks to make sure that we’re the best team we can be on the 3rd of July.”

“We’ve work hard the last month. We’ve a good lot of the lads coming back into full contact training this week who’ve been injured the last while which is another big plus for us. Things are positive, but we understand we’ve a lot of work to do to get ready for July”

“From the start of the league we’ve looked to improve our performances throughout, we’ve done that incrementally, Were happy with the progress guys are making and as I’ve said things are positive from our perspective at the moment. A very competitive 3 weeks ahead I’m sure.”

The post REVIEW: Limerick finish the National Hurling League on a high after stuttering start appeared first on Sporting Limerick.