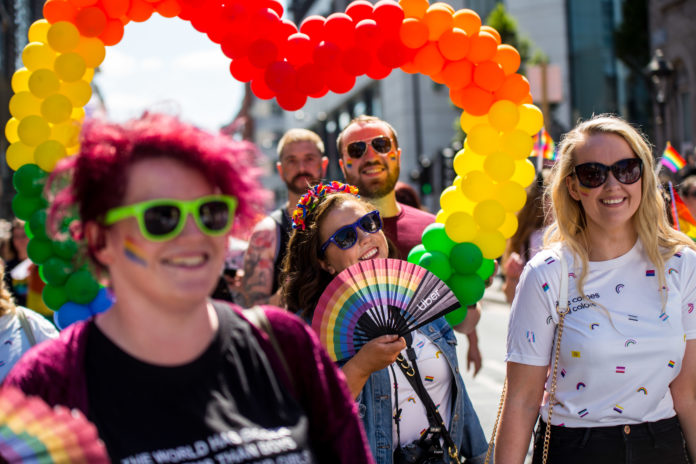 LIMERICK Pride Festival 2021 takes place from July 4 -11, with a virtual Parade on Saturday, July 10 at 2 pm live from the Limerick Pride Facebook page. The theme for this year’s Pride is ‘Different Families, Same Love’.

On Sunday, July 4, the Pride festivities will kick off with the Rainbow River Swim Parade at 2 pm from St Michaels Rowing Club which will see over 80 swimmers from Limerick swimming group Limerick Narwhals taking to the river followed by over sailing boats, paddle boats and kayaks in a celebration of Pride on the River Shannon.

Lisa Daly, Chairperson and Director of Limerick Pride Festival said, “Our Rainbow River Swim Parade is an exciting physical way to represent pride. The swim will start at St Michael’s RC and will go to Thomond Bridge and end back at St. Michael’s. We wanted a visible parade to show people we are here while also keeping in Covid guidelines.”

Richard Lynch, PRO of Limerick Pride said, “We are delighted to announce that this year’s Grand Marshall is one other than writer, presenter and activist Ranae von Meding. She is a same sex parent to two young daughters with her wife Audrey.

“Ranae is the CEO and co-founder of Equality for Children, an Irish non-profit that fights for equality for children born to LGBTQ+ families in Ireland. Ranae will kick off the festivities as Grand Marshall and will officially launch Pride with the Rainbow River Swim Parade. We will gather at 1.30 pm with speeches and begin the Swim Parade at 2pm.” he added.

Ranae commented, “ I am honoured to be this year’s Grand Marshall for Limerick Pride, particularly being that this year’s theme is ‘Different Families, Same Love.’ While we have made great strides towards equality in recent years, there is much work to be done when it comes to Rainbow Families in Ireland.

“In most LGBTQ+ led families, children are only allowed a legal connection with one of their parents. Six years on from marriage equality, this is simply not good enough and it’s important that we use Pride not only for celebration but also to raise awareness of these important issues for our communities.”

On Saturday, July 10 from 2 pm, a Limerick Virtual Pride Parade will stream on the Pride Facebook and Youtube page followed by the traditional Pridefest featuring performances from many local artists, drag queens and the annual Tea Dance with Myles Breen.

Chairperson Lisa Daly added, “Last year’s Pride Festival parade gained 62,000 viewers despite being affected by Covid 19 restrictions. People who had never attended a Pride Parade were able to attend and the Pride Festival committee received amazing feedback for all the hard work it took to host a virtual parade.

“This year, the committee were more prepared for a virtual parade so one can only imagine the excitement we have in store as this year Limerick Pride is also part of Europride and Global Pride.” she added.

The #stillnotequal we are using for Pride this year highlights the many issues we still face today which are reflected in our line-up of events throughout the week. This year the Festival is offering something for everyone and events include educational workshops, Storytime with Carrie Deway, Youth Pride, Pride in our Pets, our Climax Party which will be hosted by RuPaul Drag Race star Heidi N Closet with limited meet and greet tickets and much more!”

To register for the Rainbow River Swim Parade go HERE