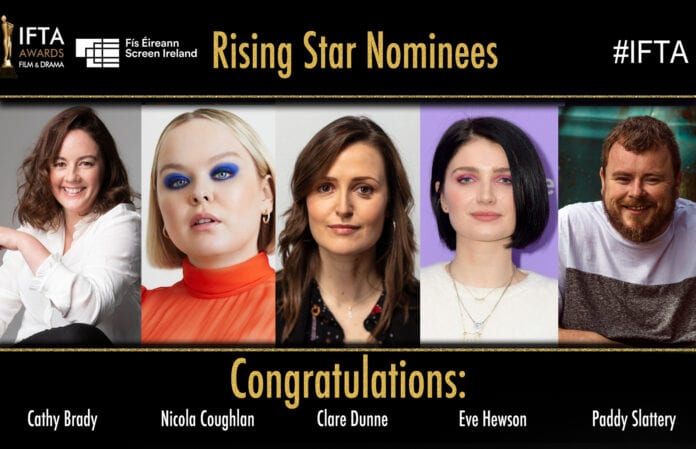 The Irish Film & Television Academy (IFTA) has announced the Screen Ireland – IFTA Rising Star Nominees for 2021, with the Winner to be announced at the IFTA Virtual Awards which will be broadcast on Virgin Media One  Sunday, July 4th at 10:00 pm.  Details about this year’s international guest presenters will be announced in the coming days.

Selected by a special jury, the Screen Ireland Rising Star Award is a unique IFTA Award, in that it puts an international spotlight on Irish professionals who have not only honed their crafts in the formative years of their career but have also excelled in their respective fields.

This would not be possible without the great work of Screen Ireland in financing Irish film production, and creating opportunities for Irish writers, directors, actors, and crew.

Eve Hewson (Actress – Behind Her Eyes)

On the 2021 Rising Stars Áine Moriarty, Chief Executive of the Irish Film and Television Academy said:

“This prestigious Award shines a light on five superb Irish professionals who are proving themselves to be world-class talents, exemplifying incredible standards of Irish craft, skill and expertise on the world stage.

“As Ireland’s Rising Stars they are a reflection of the brilliant talent coming through in this exciting phase of Irish creative growth and development.  The Academy wishes each of them continued success into the future.” she said.

Désirée Finnegan, Screen Ireland Chief Executive said “Congratulations to all the Rising Star nominees announced today who have demonstrated exceptional creativity and artistic talent. Screen Ireland recognises the incredible achievements by the nominees to date and wish them every success in the future.”

Cathy Brady is a two-time IFTA-winning director, for her short films Small Change and Morning.  Cathy went on to co-develop and direct the first series of Stefanie Preissner’s Can’t Cope, Won’t Cope for RTE/BBC3/Netflix.  Her debut feature Wildfire, which she wrote and directed, stars Nora-Jane Noone and the late Nika McGuigan and had its world premiere at the Toronto International Film Festival where it earned rave reviews.  Alongside this Rising Star nomination, Wildfire is also nominated in 5 other categories at this year’s IFTA Awards including Best Film, Best Writer, Best Director and Best Actress for both Norah-Jane Noone and Nika McGuigan.

Speaking about this Nomination Cathy Brady said: “Every year I look forward to seeing the rising star nominees and I’m reminded just how exciting the talent coming out of this country is.

“I am absolutely delighted to be part of this year’s selection and huge congratulations to the other nominees. Also, just to say thank you to those who supported and believed in me on this journey so far. You’ve been the wind in my sails!” she added.

Clare Dunne wrote and stars in the Drama Herself which alongside this Rising Star nomination, is nominated for 6 IFTA Film & Drama awards this year. The film was directed by Mamma Mia and The Iron Lady director Phyllida Lloyd, with whom Dunne had worked with on the Donmar Warehouse’s All-Female Shakespeare Trilogy.

Dunne’s film work includes Nice Night For It, The Cherishing and portrayed Victoria in Spider-Man: Far From Home.  She will soon appear in the female lead in KIN (Bron/AMC Plus), and Ridley Scott’s The Last Duel. Herself was produced by powerhouse Irish Production company Element Pictures (Normal People, Room) and Sharon Horgan’s company Merman. It premiered to rave reviews at the 2021 Sundance Film Festival.

Speaking about this Nomination:  Clare Dunne said: How much good news can one girl take?! Seriously now!  Considering who has gone before in this category, I feel so honoured to be in the 2021 list of nominations. Thank you so much IFTA!

Eve Hewson (Actress – Behind Her Eyes)

Eve Hewson can currently be seen starring in the lead role of Adele in Netflix’s hit limited series Behind Her Eyes, which quickly became the streamer’s number one show following its premiere in February 2021.

Eve is also nominated for Best Lead Actress – Drama for her performance.  Eve’s first feature role came in  2011 in the drama film This Must Be the Place, and she made her television debut as Nurse Lucy Elkins in the 2014 Steven Soderbergh series The Knick. She has appeared in films such as Blood Ties, Steven Spielberg’s Bridge of Spies, and Robin Hood. She is currently starring in the miniseries The Luminaries on Starz.

Nicola Coughlan has earned rave reviews for her role as fan-favourite Penelope Featherington, a reluctant debutante and youngest daughter of a nouveau-riche family in Regency-era London in Netflix’s biggest series ever, Bridgerton, inspired by Julia Quinn’s bestselling novels.

She is also known for her outstanding portrayal of Clare Devlin in the award-winning hit comedy series, Derry Girls. Her bold performance in this role has helped gain both her and the show international recognition.  The Galway actress is currently filming season two of Bridgerton in London. The show has already been renewed for a third and fourth season.

Speaking about this Nomination:  Nicola Coughlan said: “It’s such a huge honour to be nominated for the IFTA Rising Star Award, especially during a time when Irish talent is rightfully having a moment on the world stage. This means the absolute world to me and I couldn’t be more grateful and excited!”

Paddy Slattery is an IFTA nominated filmmaker who fell in love with the art of Filmmaking and Music during an uncertain time in his life, after he was restricted to a bed for almost a year, following a serious car accident. He suffered a severe spinal cord injury and subsequently remains Quadriplegic.

In Paddy’s words “my body switched off and my imagination switched on”.  Not one for sitting still, he now channels his energy towards the most obvious form of escapism, film. His Debut Feature, Broken Law, has been nominated for 5 IFTA Awards this year, in addition to the Rising Star Award, including best film, best director, best script, best lead actor and best supporting actress.

Speaking about this Nomination:  Paddy Slattery: “ I’m just sitting here, mouth agape, without a clue what to say about this news. I actually don’t know what to say and that’s a first for me. My dog Buster is lying in the corner gnawing on a carrot. He hasn’t a clue what’s goin’ on, God love him. I’m speechless. Thank you! Thank you a thousand times! Incredible.”

Gráinne Seoige will host the 2021 IFTA Film & Drama Awards, which will be broadcast on Virgin Media One, at 10pm on Sunday July 4th.  The 2021 IFTA Awards will be a Star-studded affair with high-profile international Guest Presenters taking the time to participate and say hello to Ireland and to present a key award on the night.