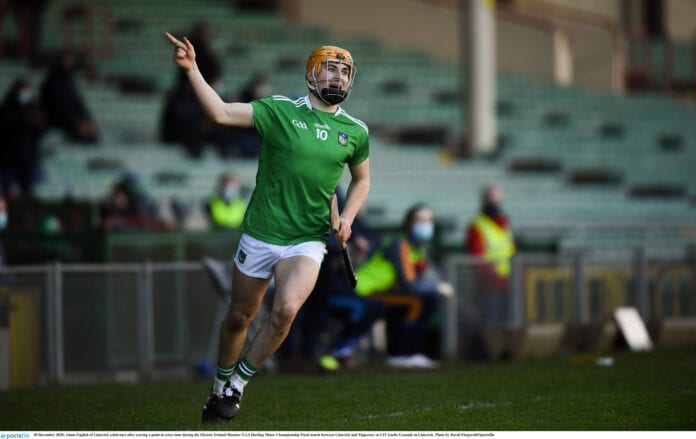 The game was originally set to take place in January was rescheduled in the wake of the pandemic.

Limerick retained their Munster title with a win over Tipperary back in December which was a second consecutive title for the Shannonsiders.

Looking ahead to the Galway clash, Mullins said,

“It’s been a long time waiting for the semi-final, when we won the Munster final in December, we initially got a semi-final date which was in early January which obviously had to be paused”.

“There were times in February and March it looked unlikely. It’s been a long time coming, so they’re going to grab that opportunity “.

“We have had six months of further development with the lads.”

The time to develop and rest has also provided the Limerick manager with a fresh squad with only one injury heading into the clash.

“Everyone’s one hundred percent bar Eoin McCormack who unfortunately broke his finger in a challenge game against Offaly, everyone else is fit and well” he added.

The Limerick man also commended Galway and their recent success at minor level and knows the challenge that awaits them if they are to move on into the final as he stated:

“Galway are experts really at getting their team prepared for a once off game, I know Brian Hanley well, he’ll have no stone unturned “.

“They have huge experience; they have ten of the starting team from last year”.

When discussing limericks previous ties and the experience they have gathered from those contests Mullins believes it will help them when facing the semi-final task at hand as he mentioned the games that will benefit them going forward. “We’ve great experience that stood to us in the two games against Tipperary and Cork” he added.

Mullins was confident that Limerick experience as he mentioned may be the difference between the two sides and hopes for a calm composed display from his side.

“We will need all of that on Friday night and that’s what we aim to bring to the game”.

The game will be live on TG4 with the winners facing either Offaly or Kilkenny. The Limerick minor side understand the difficulty of the upcoming game and fully respect a strong Galway side ahead of Friday with Mullins saying,

“Galway are the experts of minor hurling, Our focus is on Friday , not on Galway, really on ourselves to get the maximum performance”.

With coverage available on TV Limerick will be desperate to impress and do their county pride as the Limerick manager hopes the players shine and do well while having the spotlight on them in a televised game.

“Family members and supporters can look at the team and hopefully we perform well,” Mullins said.

The game will throw in at 7.30 and is sure to be an entertaining game between two hungry and talented sides.