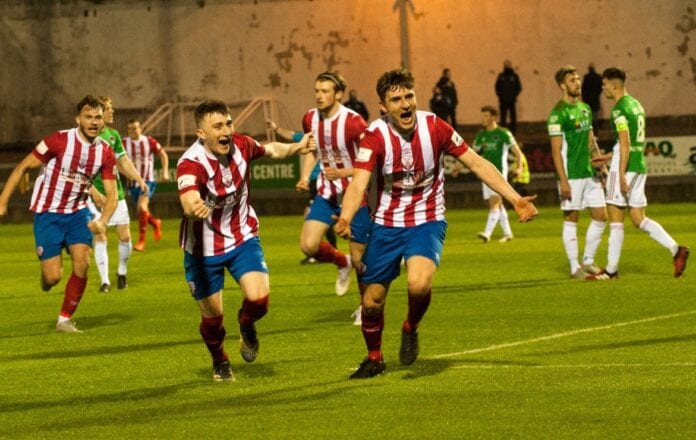 TREATY United are now level on points with second placed Galway United in the Airtricity League First Division following Friday night’s 2-3 victory over Cork City. On the balance of play in the first hour of the game, it certainly felt like a ‘smash and grab’ from the away side but two penalties from Kieran Hanlon and a first goal of the season for Joe Collins overturned a 2-1 deficit caused by Beineon O’Brien-Whitmarsh and Cian Murphy.

Treaty United manager Tommy Barrett made a decision to change to a 4-4-2 formation for the game and both Matt McKevitt and Kieran Hanlon partnered one another up front. Sean Guerins returned having missed last week’s game to Galway United and Shane Cusack started in goal in the only other personnel changes.

Cork City dominated the opening proceedings and with the return of the likes of Gearoid Morrissey and Steven Beattie to the side, they looked sharp in possession in the opening stages. In the opening 5 minutes, Dylan McGlade cut inside Charlie Fleming before curling a shot just over Shane Cusack’s crossbar.

Minutes, later, Daire Crowley headed wide from a corner as the signs looked ominous for Barrett’s men who were unable to make an impression on their opponents in the first period.

Once again, McGlade cut inside from his left wing position before delivering a dangerous cross which evaded the heads of both Whitmarsh and Murphy before going wide.

However, the visitors were awarded a penalty out of the blue as Ed McCarthy’s shot was handled in the area by Jonas Haikkinen and Kieran Hanlon placed his spot-kick straight down the middle to beat McNulty and give Treaty an unlikely lead.

Moments later, the home side were prevented an equaliser by Shane Cusack who managed to save Daire Crowley’s close range header. From the resulting corner, O’Brien-Whitmarsh reacted quickest to the loose ball in the area to prod home from inside the six yard area to score.

Ed McCarthy produced Treaty’s second shot on target but it was easily dealt with by McNulty as the sides looked to be heading into the break on level terms. However, as referee Eoghan O’Shea prepared to blow his whistle, a mistake at the back from Anto O’Donnell allowed Whitmarsh to close him down before the ball fell to Cian Murphy who raced through to slot the ball past Cusack to give Colin Healy’s side a deserved half-time lead.

Minutes into the second half, Treaty were awarded a second penalty for another handball offence, this time the guilty party was right-back Gordon Walker. Hanlon emphatically struck the penalty beyond McNulty into the bottom corner to restore parity.

The pattern of the game continued as Crowley raced down the right-hand side before delivering to Alec Byrne at the edge of the area and just as the midfielder looked likely to hit the target, his shot rose over the crossbar and into the Joe Delaney Stand.

Neat build-up play between Byrne and McGlade resulted in the latter firing wide and Treaty introduced both Joe Collins and William Armshaw in place of Matt Keane and Kieran Hanlon as it appeared that Barrett wanted to tighten things in midfield and take a valuable draw.

However, it got even better for the Limerick based side with 15 minutes remaining as former Cork City player Fleming drove at Beattie before teeing up Collins at the edge of the area. The former Galway man had only one thing on his mind as his low shot was too hot to handle for McNulty and Treaty grabbed a precious lead.

Considering the pressure that Cork had exerted for the majority of the game, the last 10 minute were relatively comfortable for Sean Guerins and his defensive unit. However, Cork will certainly feel aggrieved that Cusack’s challenge on O’Brien-Whitmarsh was not deemed a penalty in the final moments.

When referee O’Shea blew the final whistle, the Treaty players and those in attendance were ecstatic as a win had looked highly unlikely for long periods. Treaty will now host Shelbourne and UCD in back to back home games at the Markets Field and will be delighted with the league standings at present.