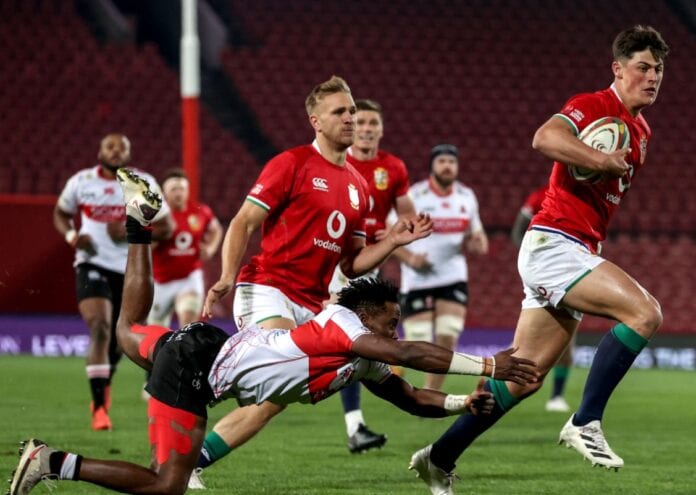 THE British and Irish Lions began their tour with a convincing win over South Africa’s Sigma Lions this Saturday at Ellis Park. The fixture could have been described as fast and loose, as the absence of a strict game plan actually facilitated some remarkable creativity and improvisation from both sides.

The youngest Lions debutante since 1987, Louis Rees-Zammit, grabbed his first try of the tour in the games opening minutes thanks to a superb chip-and-chase from Scotland centre Chris Harris. It wasn’t long until the tourists scored again as Scottish open-side Hamish Watson crashed over to bring his side two scores up. The consistency of Owen Farrell’s boot was relied on as he converted the two early tries with ease.

The Lions’ Scottish subset put in a big shift, as scrum-half Ali Price dotted one down between the posts not long after man of the match Watson. However, the Sigma Lions wouldn’t take it sitting down as their hulking open side Vincent Tshituka galloped over the line to score his side’s first points of the game, a score converted by fly-half Jordan Hendrikse.

The half came to an end as Lions front row Wyn Jones had a disallowed try due to an illegal clear-out by Courtney Lawes at the previous breakdown. The half ended with a scoreline of 21 -10 to the British and Irish Lions.

The floodgates opened in the second half as Josh Adams crossed the whitewash a staggering four times, The Welsh winger was the first to score in the second half and appeared to thrive in the free flowing style the game cultivated. Sigma Lions’ Rabz Maxwane would score his side’s only try of the second half as he darted over to help bring his Lions to 14 points, a score that out-half Jordan Hendrikse also converted.

Stellar performances from Finn Russell and Owen Farrell certainly didn’t go unnoticed as they linked up multiple times to create chances for their outside backs. Russell’s kick-pass for Adams’ second try was yet another example of the Scot’s remarkable creativity, while Farrell was mister reliable off the tee maintaining a 100% kick success rate across 8 attempts. The final score was a one sided 56 -14 to the tourists.

The Lions will line out again this coming Wednesday July 7th against the C Cell Sharks, with kick-off at 9:00pm.