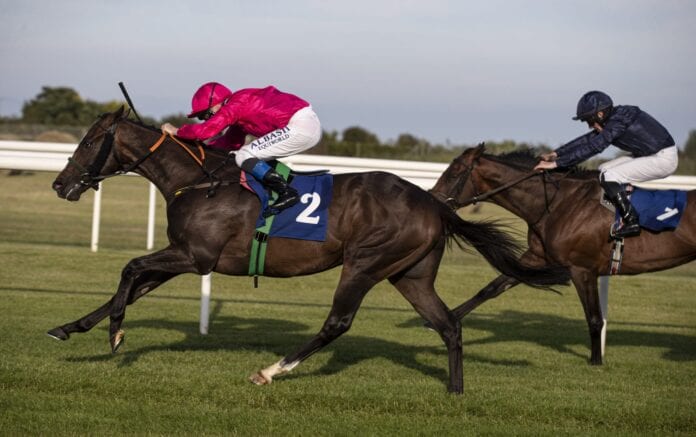 With three winners, Colin Keane took the riding honours at Roscommon on Tuesday night but it was Chris Hayes who landed the biggest prize on offer as he partnered Layfayette to win the Listed Lenebane Stakes, the biggest Flat race of the year at the track.

Hayes brough the Noel Meade-trained 11/4 shot from off the pace to win by a length and a quarter from the Aidan O’Brien-trained Hector De Maris with Reve De Vol, the 2/1 favourite, only sixth for Ger Lyons and Colin Keane.

Wesley Joyce brought his tally to four winners when crediting Cahir trainer Eoin McDonagh with his first success as Attelboro took the five-furlong handicap at Tipperary on Wednesday night.

The 17/2 chance, which is owned by McDonagh himself, hit the front inside the final furlong and got the better of the David Marnane-trained 7/2 favourite Poet’s Pride by half a length. Kilmallock trainer Pat O’Donnelll and Billy Lee combined to win the second division of the 12-furlong handicap with the 5/1 shot Extensio. The four-year-old came from well off the pace to pip the Emmet Mullins-trained 7/2 favourite Battle Angel by a neck.

Lee was a winner again at Bellewstown on Thursday evening where he took the second leg of the 14-furlong handicap on Third Avenue. The 14/1 chance, trained locally by John McConnell, beat the Mark Fahey-trained Hattie Amarin to the line by three-parts of a length.

Cathal Byrnes enjoyed his second success in the training ranks as Summer Tide landed the opening division of the two and a half-mile maiden hurdle at Tipperary on Thursday evening.

Kevin Brouder partnered the 5/2 chance to a four and a half-length success over the Mattie Tynan-trained Chicago Time for owner Patricia McCarthy, an aunt of the winning trainer. Byrnes and Brouder shared another winner at Tramore on Sunday where the Golden Circle Group Syndicate-owned Gendarme took the two-mile handicap hurdle. The 4/1 chance beat the Ross O’Sullivan-trained Royal Recital by two and a quarter lengths.

Chris Hayes gained his second success of the week as Storm legend landed the seven-furlong conditions race at Naas on Saturday. The Fozzy Stack-trained 9/2 chance lasted home by a head to beat the Ger Lyons-trained Acanella and the winner is now off on his travels, taking in a race in England en route to continuing his career in Hong Kong.

A little closer to home, Ballingarry trainer Gillian Scott and Mark Enright landed a 20/1 winner for the Seconds To Spare Syndicate as Petticoat Rule took the eight-furlong handicap at Limerick on Sunday.

The four-year-old got on top inside the final furlong to win by a length and three-parts from the Philip Byrne-trained Out On Friday. Scott said, “That’s brilliant as the syndicate are new owners and she has been lucky for them.

They only had her a week before she was third at Listowel and now she has won. There are 10 members, mostly from Munster and a friend of mine from Australia took a share as well and she’ll be over the moon! My husband Caolan organised it, again, and he’ll get a job out of this! She was bought for €2,000 so I’m delighted for everyone involved.”