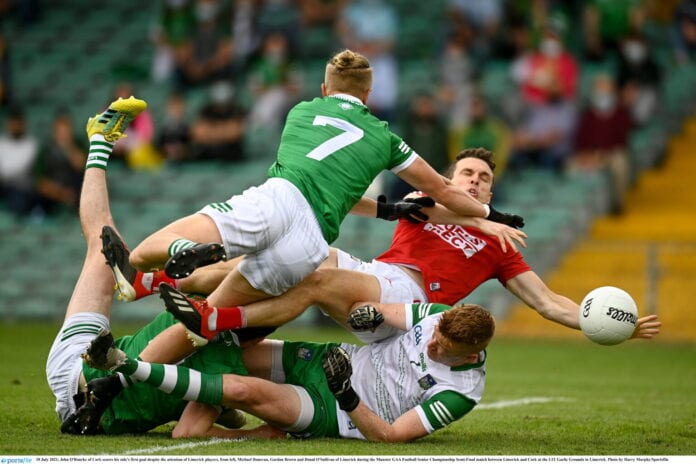 LIMERICK enjoyed a really bright start with a well taken Gordon Browne point inside the opening 60 seconds. That positivity was short lived as the first real Cork attack split the Limerick defence. A John O’Rourke shot was bravely saved by Donal O’Sullivan but the ball rebounded off the Cork Forward and trickled agonisingly over the line.

Doubling down on the setback, O’Sullivan had to leave the field following the knock and was replaced by his namesake Aaron from Pallasgreen.

Danny Neville settled nerves with a 10th minute free after drawing a foul to make it a 1 point game 0-2 to 1-0. Cork responded through a Brian Hurley free from a very acute angle making it 1-1 to 0-2.

As the clock ticked past the 15 minute mark, Cork had been whistled for 9 frees but one could argue that committed many more. Danny Neville and the Limerick inside forward line were coming in for some special holding tactics but umpires, linesmen and referee all remained unfazed.

The long wait for the next score extended into the 18th minute when Hugh Burke landed a free. The score was quickly nullified through an Ian Maguire point.

Another scoreless period ensued but Hugh Burke and Brian Hurley exchanged frees in the 31st minute. Cork’s Sean Powter made it a 3 point game on 35 mins with a fine point from play to make it Cork 1-4, Limerick 0-4.

The board for added time indicated 5 minutes and with just a kick of a ball between the sides, it meant Limerick had a chance to close the gap. The opposite happened as Cork kicked on with points form Sean Powter and Mattie Taylor to make it 1-6 to 0-4 at the break.

Billy Lee would have been looking for quick response from his charges but John O’Rourke added the first point of the second half for Cork. Danny Neville cancelled it out with Limerick’s second point from play but conceded a free in the next attack which Brian Hurley converted.

A Hugh Burke free made it a 5 point game once again. Replacement keeper Aaron O’Sullivan then landed a 45 to reduce the arrears to just 4 points. Brian Hurley restored Cork’s cushion before John O’Rourke made it a 6 point deficit. It was beginning to look like Limerick would need goals.

The next attack yielded the first real chance when Danny Neville left his marker for dead before blazing his shot agonisingly left and wide. The Ballysteen man made up for it moments later with a super point off his right leg to keep Limerick chipping away.

Limerick were attacking patiently and a foul on Gordon Browne allowed Hugh Burke to make it a 4 point deficit but Cian Kiely responded for with a point for Cork as he was afforded way too much space a the city end of the Gaelic Grounds.

A trademark Iain Corbett run pierced the Cork defence as the Newcastlewest man split the posts with a fine effort off the outside of his right boot. Aaron O’Sullivan dropped a 45 short which the Cork defence cleared. It was another scoring chance spurned, another chance lost to make it a one score game.

Keeping with the prevailing trend of the game, Cork went up the other end and landed fisted points from John O’Rourke, Cian Kiely as well as points from Brian Hurley (2) and Sean Meehan to make it 1-16 to 0-10.

Iain Corbett got the last score of the game to make it 0-11 to 1-16. The final whistle sounded moments later. Cork fully deserving of their win but flattered somewhat by the final scoreline.

The post Cork’s Efficiency Crucial In 1-16 to 0-11 Win Over Limerick appeared first on Sporting Limerick.