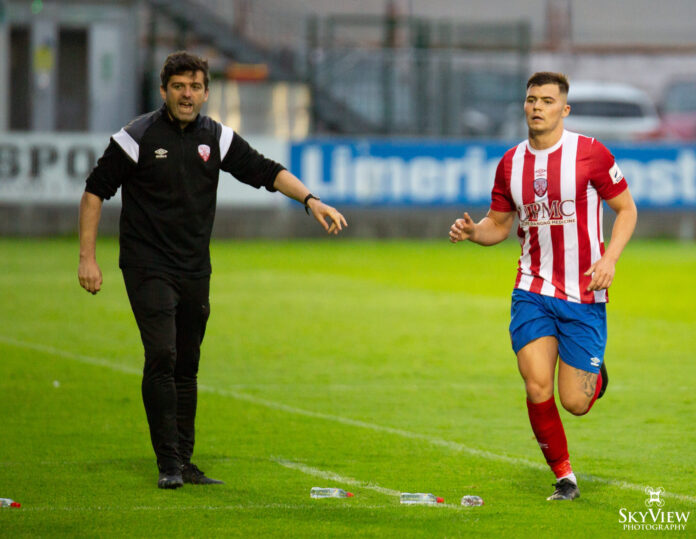 TREATY United secured a vital three points at the Markets Field on Friday night with a 2-1 win over UCD. A brace from Jack Lynch in each half cancelled out Colm Whelan’s penalty equaliser early in the second period.

On a glorious but intensely hot evening at the Garryowen venue, the home side started with a real purpose as Charlie Fleming met a Marc Ludden corner but his header was cleared off the line. Striker Kieran Hanlon was in the thick of the action throughout the evening and his driving run was halted by Sam Todd and the subsequent free-kick was blasted over.

The visitors produced a great chance of their own from a set-piece when Paul Doyle’s dangerous delivery was met by Whelan but Tadgh Ryan adjusted his body superbly to save. Shortly afterwards, Tommy Barrett’s side took the lead as Ludden’s floated ball picked out the run of Lynch who headered the ball beyond the surprised Lorcan Healy who failed to keep it out.

Winger William Armshaw had made a big impact earlier on and linked up well with the likes of Ludden but Barrett replaced the former St. Michaels man on the stroke of half-time and says that Armshaw will need to build his stamina at a demanding level as it was the winger’s first start this season.

At the beginning of the second half, UCD were awarded a penalty as Callum McNamara committed a foul on Liam Kerrigan on the byline and Colm Whelan made no mistake from the spot-kick. The response from the home side was exemplary as they went in search of another goal.

Hanlon out muscled Sam Todd to hold up possession and lay the ball up for Matt Keane who delivered a superb cross into the area which was once again met by captain Lynch at the back post who adjusted his feet brilliantly to side-foot into the net.

A raft of substitutions disrupted the flow of the game which wasn’t a problem for Barrett’s charges who were restricted UCD to very little. There were dangerous moments however when the likes of Dara Keane, Liam Kerrigan and Colm Whelan almost latched onto balls over the top of the Treaty defence but a combination of Tadgh Ryan and poor control meant that the lead was intact.

Andy Myler’s side did have a huge chance to equaliser with ten minutes to go as a clever through ball from Paul Doyle picked out the run of substitute Adam Lennon who squared for Liam Kerrigan but his shot was blocked by Ryan.