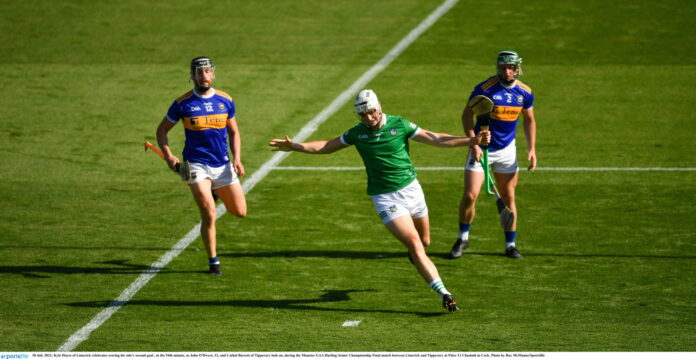 KYLE Hayes’ goal in the 54th minute was a shock to the system for Tipperary, but very few from Limerick would’ve been as surprised.

Marty Morrissey described it as ‘goal of the year’ from the gantry and it may well turn out to be just that.

The incredible solo goal was the defining memory for some in an absolute classic of a game between Limerick and Tipperary in the Munster Championship final.

The 23-year-old took the game into his own hands when he had the ball in front of the main stand at his own 45.

He went on a mazy run, piercing through anyone who came in his way before slotting it into the net in the sunshine on a glorious hot day at Páirc Uí Chaoimh.

The Kildimo-Pallaskenry man stepped up when it was most needed to put a five-point gap between the sides after Limerick were 10 points down at the break.

Manager John Kiely said that Hayes can dedicate his performance to his close friend and teammate Darren Whelan, who died tragically in the Greek Island of Ios earlier this month.

“It hits these boys tremendously when something like that happens. But, you know, hats off to Kyle. It was difficult for him to do what he did today, and at times he found it hard outside there on the pitch.

“But like everything Kyle does, he gives it his all. There’s no reverse. It’s only going forward with Kyle Hayes. That’s the bottom line and I hope that’s the way he’ll continue to be. And he can dedicate that performance to his great friend.”

That goal was testament to Hayes’ attitude after a difficult few weeks and a tough first half.

Kiely said that the third quarter performance was ‘the strongest quarter from the Limerick hurlers in five years and It needed to be, it had to be’.

Thinking back to Ciarán Carey’s words in the build-up to the game, they ring true after that game.

“Take Kyle Hayes at this moment of time for example, he’s the one player that you can put any number on his back and you’d be confident he’ll do a job.”

The post WATCH: The Story of That Kyle Hayes Goal appeared first on Sporting Limerick.