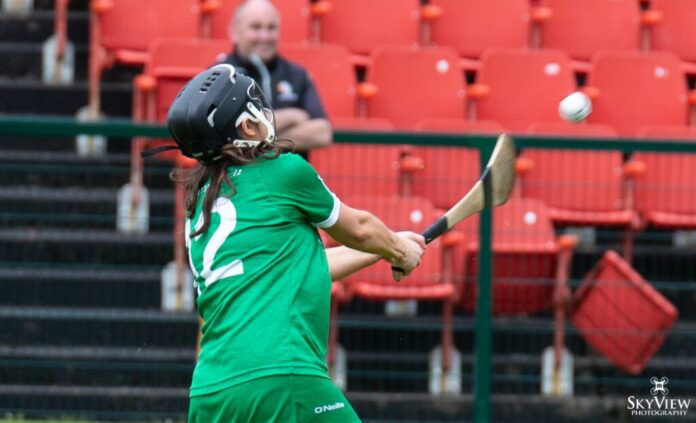 THE Limerick Junior Camogie team have all but secured a knockout spot in the All-Ireland championship after their 3:11 to 1:10 win over Cavan in Bruff.

Both sides were on the scoreboard early, as Limerick responded to a Cavan point to level the score. Yet, it wasn’t long before the home side gained the lead with a second point from Valerie Shanahan.

Cavan kept the pressure on the Limerick defence and got an equaliser from Shanise Fitzsimons before they moved one clear.

A free from Clodagh Keenaghan extended their lead to two points, while they continued to pile on the pressure on the Limerick backs.

Ailbhe Larkin managed to put Limerick back on the offensive with a sublime point from a tight angle as they trailed by one at the first water break.

Cavan kept the pressure on with a number of attempts to find the back of the Limerick net, Limerick keeper Aoife Corbett brought her A-game, keeping the opposition from scoring and regaining possession for Limerick

Two critical points from Enya Harrington and Ailbhe Larkin earned Limerick a two point lead to close out the half, with a scoreline of 1-5 to 0-6.

The second half got underway and Cavan were hellbent on regaining the lead. Noelle Curtin wasted no time in closing the gap for Cavan with a point from open play. The Cavan forwards were relentless in attack, it wasn’t long before their efforts were rewarded with a goal to bring the game back to all square.

In response, Limerick went end to end allowing Íde Cunningham to bury another one in the Cavan goal. Limerick kept their foot on the gas as Valerie Shanahan found the back of the net for a second time in a minute.

Another point from Valerie Shanahan kept the momentum going in Limerick’s favour. Cavan’s Clodagh Keenaghan tried to narrow the gap with a point only for Valerie Shanahan to reply before the water break.

Shanahan was in the zone as she found another Limerick point to extend her sides lead to eight points.

Larkin added another point for Limerick as Cavan showed few signs of wrestling their way back into the game.

The first Cavan point since the water break was replied to within minutes by Limerick. Cavan nailed two additional points going into injury time, yet Limerick’s lead was still a healthy seven points.

Limerick maintained that advantage for a final scoreline of 3-11 to 1-10 which all but books their place in the knockout stages of the championship.

The post Limerick Junior Camogie side kick off championship campaign with big win over Cavan appeared first on Sporting Limerick.