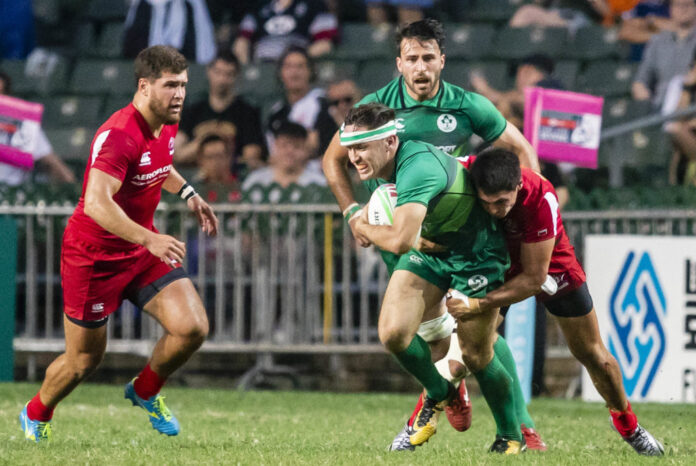 SAILORS Robert Dickson and Sean Waddilove announced their arrival at the 2020 Tokyo Olympic Games with a splash this afternoon as they finished in first place in their opening 49er class race, edging out Great Britain and Germany. There’s still a long way to go in this competition though, with 12 races in total in the series.

Indeed it was a good day all round for the sailors, with Annalise Murphy following on from her impressive form earlier to secure a 10th place finish in Race 6 this afternoon, seeing her move into 20th place overall.

Ireland’s Rugby Sevens squad came back with a bang at Tokyo Stadium in their second game of the day meanwhile, winning out comprehensively over the Republic of Korea, 31-0, to see them through to a 9-10th place clash with Kenya tomorrow (July 28th).

It was onwards and upwards for Ireland’s Rugby Sevens squad today, as they faced off against Republic of Korea in the first of their 9-12 place placing games. Having failed to progress from the pool stages to the quarter-finals, Ireland put on a strong showing in today’s second game to win out in comprehensive fashion, 31-0.

Ireland started quickly with scores by Mark Roche and Jordon Conroy in the first five minutes to secure a 10-point advantage at half time. Republic of Korea started strong in the second half, but Ireland held them scoreless before adding three more tries, one more from Conroy and a double from Gavin Mullin.

“We said we would go out and attack them,” said first try scorer, Roche. “We wanted to hold on to the ball, and that’s what we did for the 10 points that we got and then we just switched off a little, we allowed them play instead of attacking them in defence. We know how to pick ourselves back up for another game and know how important it is to finish strong and get that 9th place.

“It was tough this morning, a tough one to take with that last minute try to put us out,” said Mullin of their bittersweet win over Kenya in their final pool game earlier. “It’s a good group here so we just managed to shake it off in the afternoon. We all just chilled out a bit, relaxed. We’re at the Olympics and we have to go out and enjoy ourselves. It was still pretty sloppy to be honest. We’re still not happy with where we are but we’ll come out tomorrow for our last game and just have a bit of craic.”

Ireland will face Kenya once more in the final game of their Olympic campaign tomorrow (July 28th) in a bid to finish in 9th place.

Sailors Robert Dickson and Sean Waddilove made their Olympic debut with a splash today, as they finished in first place in their opening 49er class race, edging out Great Britain and Germany. After a tricky start, with Race 1 being abandoned due to shifting winds, the race officials reset the course and the Irish sailed strongly to finish first. Racing is now cancelled for the rest of today and will resume tomorrow. There’s still a long way to go in this competition though, with 12 races in total in the series.

It was a good day for Annalise Murphy as well in her Laser Radials, as she secured two top 10 scores, with a 9th and 10th place in Races 5 and 6 respectively has moved her into 20th place. Today’s earlier Race 5 marked the half way point of the regatta. The Lasers now have a rest day (Wednesday) with racing to resume on Thursday with Races 7 and 8 in the ten race series.