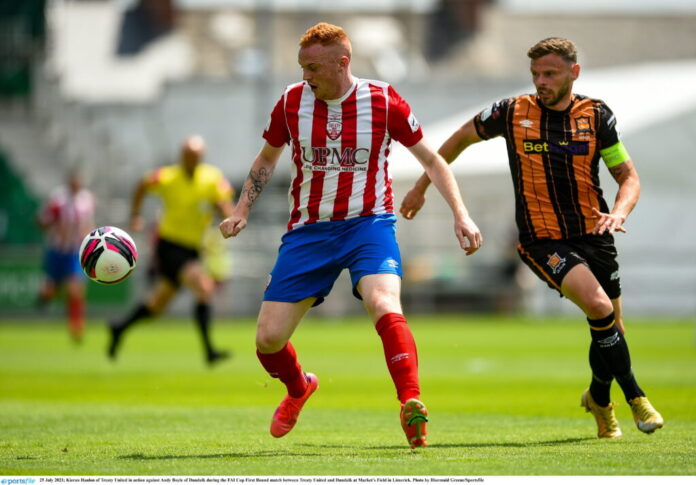 TREATY United lost out to holders Dundalk AET in the FAI Cup in the Markets Field on Sunday afternoon.

Patrick McEleney’s goal in extra-time proved decisive as Treaty pushed the Premier Division side all the way.

Reflecting on the defeat, Treaty manager Tommy Barrett praised the efforts of his side against the current champions.

“I thought we played really really well, we hung on in there at periods in the second half but I thought in the first half we played some very good football”

Barrett had made some positional changes before their clash with Dundalk, which saw Treaty’s Ed McCarthy move from midfield to right-back.

“He’s a good player, you can see why he can play there (right-back). He’s very good 1v1’s, He’s very comfortable on the ball, he’s very composed and he’s just a very very good defender.”

A turning point for Treaty United was the sending off of Anthony O’Donnell, who was shown read due to a forceful challenge on Dundalk’s Han Jeongwoo with just 8 minutes left.

“I thought it was harsh, I thought it was very harsh when I saw it in real time… We’ve had decisions against us like that all year and they’re not even frees… They’re the decisions the bigger teams get, they seem to get them a lot more than us”

Treaty need to turn their focus to next Friday, where they will travel to face Athlone Town in the first division of the SSE Airtricity League.

“We’ll look forward to Athlone where we’ll hopefully put in another good performance.”