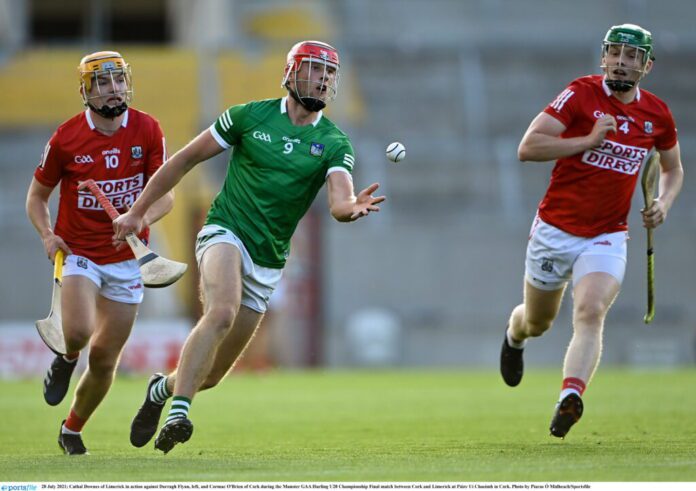 CORK are the 2021 Munster U20 Hurling Champions, after a two point victory over Limerick. Having trailed by six with just eight minutes remaining, came back to level but were unable to find the lead score and Pat Ryan’s Cork retained their crown.

For Cork, it is a 21st Munster U20/21 title, equaling Tipperary. For Limerick, focus turns to senior, after defeats in U17 and U20 competitions this week. It is the third year on the trot that Cork have ended Limerick’s hopes at this grade.

Manager Diarmuid Mullins made two changes to the starting fifteen from the comfortable semi-final victory over Clare. In came Cathal Downes and Ronan Fox, with Patrick Kirby and Donnacha O’Dalaigh making way.

Limerick, playing with a strong breeze at their backs in the opening half, led 0-8 to 1-4 at the first water-break. Cathal O’Neill top scored with four frees while Aidan O’Connor, Diarmuid Hegarty and Bryan Nix were all on target.

Cork shook Limerick with an early goal from Padraig Power, who slipped his man and flicked to the net. But Limerick recovered with O’Neill frees keeping the scoreboard ticking.

The hosts finished the first half stronger with free-taker Darragh Flynn ending the half with seven placed balls to his name, while Power fired over two quick-fire points.

The half-time scoreline on Leeside read Cork 1-13, Limerick 0-14, after the sides had been level on seven occasions.

Cork remained ahead, but this time by four, by the 47th minute and the second-half water-break. Darragh Flynn managed four points from play in this period, with Cathal O’Neill raising his first white flag from open play with a terrific sideline effort.

Cork appeared to be heading for a comfortable victory when Ben Cunningham sent them six clear. But Limerck had other ideas. Diarmuid Hegarty, who finished with 1-3, goaled in the 52nd minute when played through by corner-forward Bryan Nix.

Cathal O’Neill quickly added a trio of points to bring the game level into stoppage time, but points from Power, Flynn and a second from Cunningham ensure Rebels retained the title.