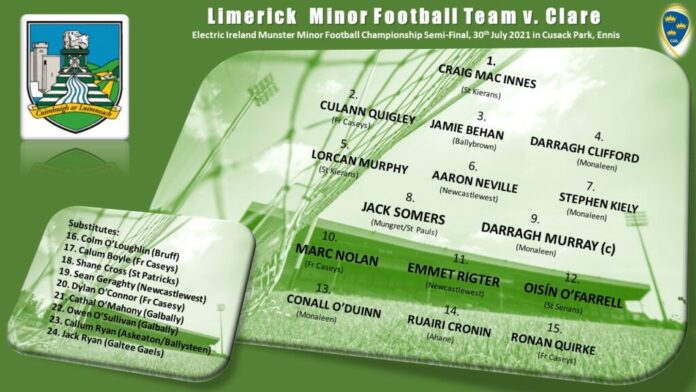 Limerick take on Clare in the Munster Minor Football semi-final this Friday in Cusack Park.

Limerick manager Kevin Denihan has made one change to his team to take on the Banner with Culann Quigley coming into the side in the place of his clubmate Michael Kilbridge.

In a positive change, vice-captain Cathal O’Mahony is named among the replacements after missing out on the quarter-final.

Limerick booked their place in the semi-finals after defeating Tipperary 2-9 to 1-9 in the LIT Gaelic Grounds last week.

Their opponents Clare received a bye into the semi-finals after reaching the final in 2020.

The Banner defeated Limerick at the same stage last year, running out comfortable 4-20 to 1-10 winners in the LIT Gaelic Grounds.

Throw in in Cusack Park this Friday is 7pm.