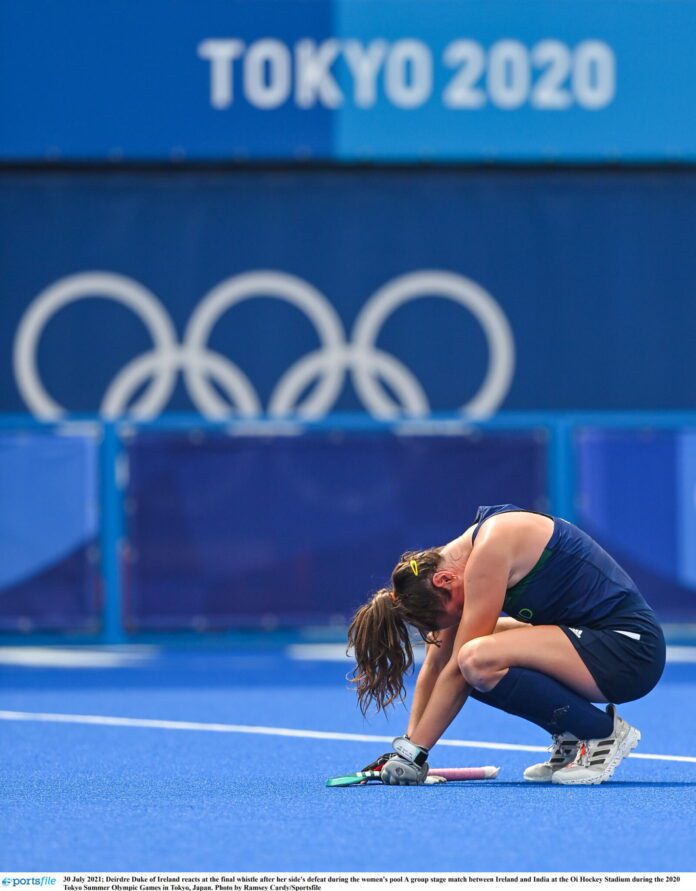 IRELAND’S hockey team face an uphill battle to qualify for the quarter finals of the Olympics following their 1-0 defeat against India in the early hours of Friday morning.

Navneet Kaur’s 57th minute winning goal denied the Green Army what would have been a crucial point at the Oi Stadium in their penultimate Pool A affair.

Róisín Upton and co defended brilliantly for the whole game as goalkeeper Ayeisha McFerran pulled off a few brilliant saves, only to be left feeling deflated with the deflected effort going in with three minutes to go.

Speaking after the game, assistant coach Gareth Grundie was rueful of the performance.

“Disappointing to concede with so little time left but, on the balance of play, we didn’t deserve it. We weren’t good enough today. Ayeisha was good. Our penalty corner defence was good but you can’t go through 60 minutes, give away that much and expect to get a result.”

After winning her 150th cap, Deirdre Duke was as disappointed with the performance but remaining hopeful for the next game, saying ‘we’re going to have to refocus and regroup.’

“That was a game that we needed to win and we didn’t so that’s my overwhelming feeling. We win as a team and we lose as a team. We are going to have to regroup and take a look at ourselves individually but it is always a collective effort and we always rally together.”

There’s still a chance for Sean Dancer’s side to advance to the next stage, with the stakes high for the last group game against neighbours Great Britain.

Ireland currently sit on fourth place, marginally ahead of India on goal difference.

India will be facing off against bottom side South Africa, who Ireland beat 2-0.

Ireland’s opponents Great Britain beat the Indian side 4-1 when they faced off earlier in the week.

As it stands, Ireland must hope to at least equal whatever result that India muster up against South Africa.

If they do, all eyes will turn to goal difference with Ireland on -5 and India on -8 in the race for that valuable quarter final spot.