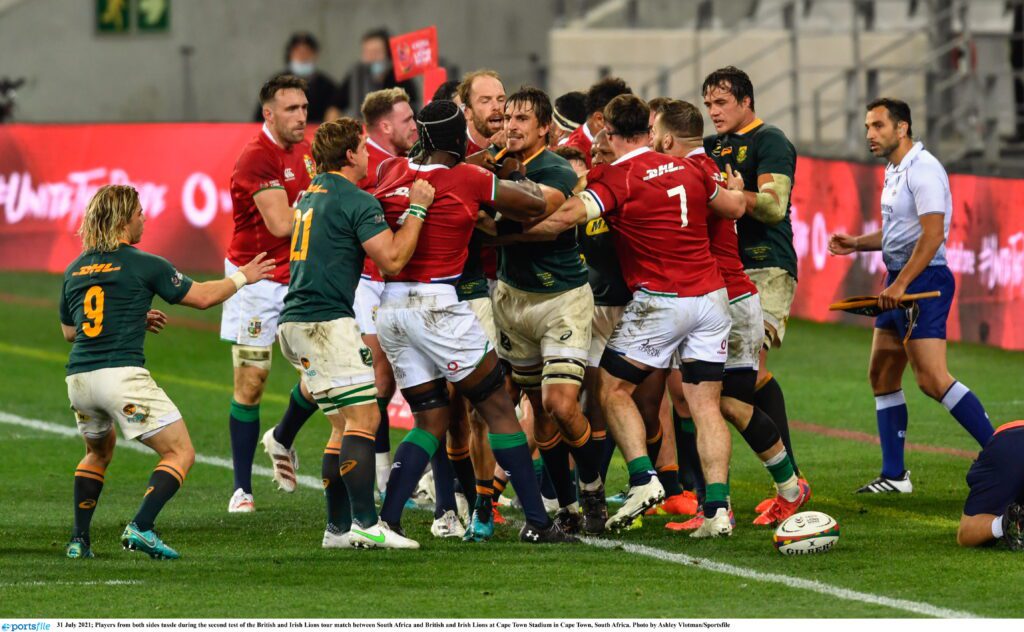 THE tour hosts avenge their first test loss with a 27 – 9 hammering over the British and Irish Lions in Cape Town.

The 2021 Lions series is still up for grabs as the Springboks equalised with a comprehensive win over the Lions this evening in Cape Town. There was a lot made of the fixture leading up to kick-off, as Springboks director of rugby Rassie Erasmus openly criticised the officiating in the series first test via a youtube video.

The game began in the Lions favour as Lions out-half Dan Biggar responded to an early Springboks penalty with two consecutive kicks at goal. A 3 point Lions lead went unanswered for some time as Handre Pollard pushed his second penalty kick wide of the posts.

The Springboks then suffered the loss of open-side flanker and 2019 World Player of the Year, Pieter-Steph du Toit, who had to leave the pitch due to a knock he received courtesy of Duhan Van Der Merwe. Du Toit could be a significant loss for the final deciding test if deemed unfit to play.

The first-half saw tempers flair as the game clock was stopped on a couple of occasions in order to break up brawls which broke out amongst the players. The anger seemingly spilled over into gameplay as both Lions and Springboks wingers Duhan van der Merwe and Cheslin Kolbe were handed yellow cards for separate incidences that occurred within minutes of each other.

Van der Merwe was guilty of tripping Kolbe in open play, as he was unable to get close enough in order to complete the tackle. Once play resumed after van der Merwe’s sin-binning, Kolbe was then shown yellow for taking out Conor Murray in the air, an offence that Kolbe was arguably lucky to have only received a yellow for.

Robbie Henshaw was denied his first test try due to the sublime defence of Springbok captain Siya Kolisi. Henshaw was at the end of a precise kick pass from Conor Murray but was denied the first try of the game as Kolisi’s strength forced the ball to be held up.

Biggar and Pollard traded penalties before the end of what was a long first half, but it was South Africa that pounced first upon resumption.

Springboks winger Makazole Mapimpi finished what was a sublime number of attacking phases from the home side, and despite Pollard missing the conversion there were no questions about who had the upper hand. A missed penalty from Biggar only played into the Springboks momentum as they continued to dominate both territory and possession.

The Springboks were rewarded once again for their dominance as centre Lukhanyo Am chased after a pin-point grubber kick from fellow Bok Faf de Klerk. Despite question marks surrounding the grounding of the ball, TMO evaluation resulted in the awarding of Am’s try and a healthy Springbok lead.

Three final penalty kicks from Springbok out-half Handre Pollard sealed the final result of 27 – 9 to the home side as the Lions declined in discipline as well as failing to create any momentum in the games final few minutes.

The Lions will have to make some changes if they are to avenge the 2009 series loss to the Springboks, a series loss famous among past tours. Nevertheless, the 2021 series decider is set to take place in Cape Town next Saturday August 7th at 5:00pm.

The post Springboks rattle the Lions to square up the series appeared first on Sporting Limerick.