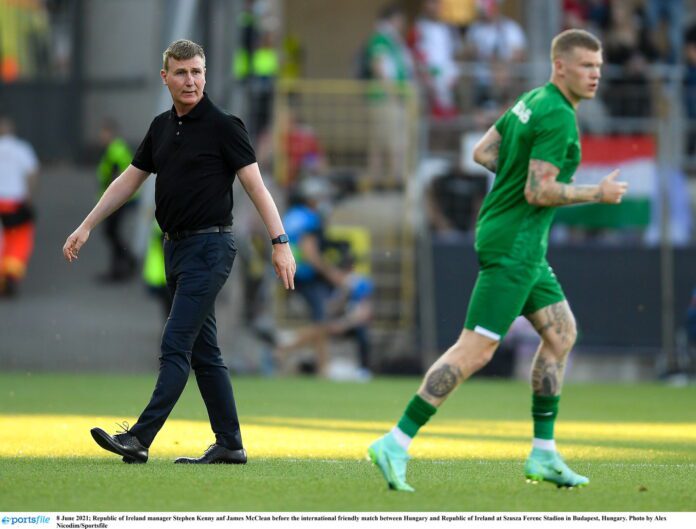 IRELAND winger James McClean has criticised the Irish media and asked for patience with the current Ireland set-up following the disappointing 1-1 draw with Azerbaijan.

The team is a melange of young and experienced as the under fire Stephen Kenny is at the helm, with just the one win in his opening 15 games at the helm.

The Wigan Athletic man picked up his 84th cap for his country on Saturday, making him the most experienced out of the bunch. He acknowledged that the bad press surrounding the team will only go away with good results but was quick to defend what Stephen Kenny is doing, amid a few reports of a sacking if he fails to beat Serbia on Tuesday night.

The 32-year-old has found his best form elusive in recent games and he has hit out at the Irish media for their reaction to the current state of affairs.

“I’m just not talking about under Stephen, I’m talking about it’s always been that way,” he said of the press coverage of the team.

“You almost get a kick out of us not doing well. I do think that. I’ve been there, I’ve experienced it, I’ve been around now almost ten years in the Irish team, there’s no one going to convince me otherwise. Sometimes it’s fair, sometimes it’s not fair. Sometimes it’s a bit over the top. But that’s just my opinion on it.”

The winger went as far as saying the Irish media “is just as bad, if not worse” than in England where he constantly comes under fire for not wearing a a poppy on Armistice Day.

Perhaps something to ponder for the media in Ireland but with the current crop finding goals hard to come by, sat on a single point in the World Cup qualifying group, it could be partly justified.

There’s definitely a new direction for the current team with the likes of Gavin Bazunu & Adam Idah shining as of late, patience could be key at this vital time. The performance against Portugal gifted hope before the dire showing against Azerbaijan.

Although reports are mixed, some say that Kenny still has the backing of the board with others saying his job is on the line against Serbia. It must be argued that Ireland have played some of their better football in periods under the former Dundalk boss.

When taking a step back from it all, McClean cited another reason for the Irish contingent to bide their time with the team.

“Not even that, you take into consideration the whole Covid thing, this is the first time these young lads are playing in front of, or they haven’t even played in front of crowds, and that spurs you on alone.

“So, obviously I’d ask for patience with him but football, it’s cut throat, the media’s harsh and I ask for a bit of patience but when you’re not winning games, it falls on deaf ears, and I can understand that.”

McClean has spoken of his astonishment at just how fickle the game and its surrounding media can be, in particular following the 5-1 World Cup play-off loss to Denmark 2017 and the grilling that fell at the feet of Martin O’Neill in the aftermath.

“I remember at the time thinking, ‘This is madness This is astonishing, actually,’ the reaction, considering the group we were in and how close we came,” McClean said.

“If we win Tuesday night and put a run of wins together, the same people with the knives out now will be the biggest supporters again. Football’s fickle, and that’s the way it is. We need to start winning games.”

The post James McClean asks for patience, stating Irish media ‘get a kick out of us not doing well’ appeared first on Sporting Limerick.