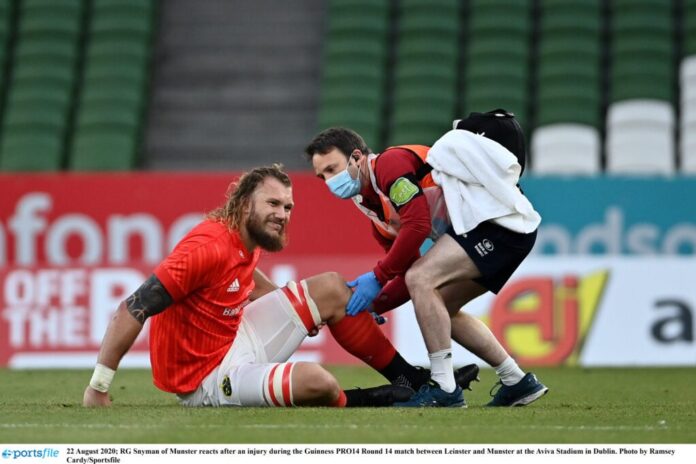 MUNSTER are set to face Exeter Chiefs in Sandy Park this Saturday 11th of September in their final pre-season game before the beginning of the United Rugby Championship (URC) season.

Munster welcomed some of their previously sidelined players back to training this week, full-back Mike Haley (groin) along with centre Dan Goggin (thigh) have both returned to training as the squad prepares to line out against the 2020 Champions Cup winners.

New signing Jason Jenkins sustained a low-grade shoulder injury in training, thankfully the second-row is expected to return to training in the next few weeks.

Munster fans far and wide have been anticipating the return of second-row RG Snyman. Thankfully there is good news for the World Cup winner, as he stepped up his rehabilitation this week and will follow a modified training programme. If he continues to progress positively, RG is expected to be available for a potential return to action in October.

Snyman hasn’t played a game since he made his debut for Munster in August of last year, where he suffered an ACL injury against Leinster. After a few further setbacks with the injury, Snyman was the victim of a fire pit accident resulting in him requiring a skin graft.

Back-row John Hodnett continues to make good progress with his rehabilitation from an achilles tendon injury, and is on track to begin a modified training programme in the coming weeks.

Like last week’s Munster Challenge Match, the 10 Munster players who lined out for Ireland in the Vodafone Summer Series will not be available for selection this weekend against Exeter.

Academy full-back Jonathan Wren suffered a thigh injury in the Munster Challenge Match and is set to be assessed this week with the medical department to determine the extent of the injury.

Limerick native Daniel Okeke sustained a concussion in the Munster Challenge Match last weekend. The Ireland U20 back-row will enter the return to play protocols under the supervision of the medical department.