Home News Calls for UL to intervene after 2,000 students party in estate 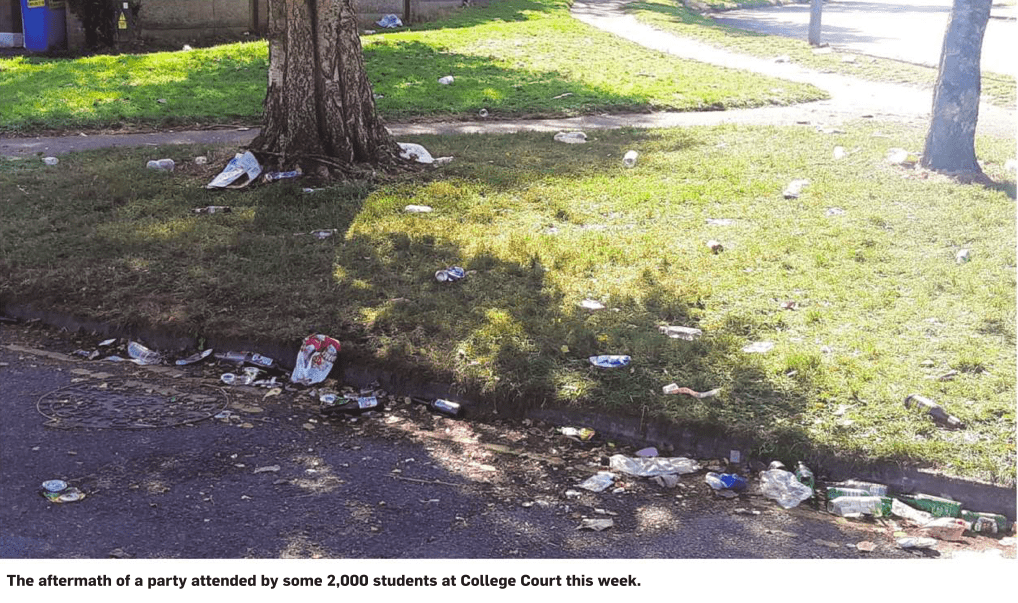 GREEN Party councillor Sean Hartigan wants the University of Limerick to introduce an off campus code of conduct after hundreds of students caused havoc in nearby estates this week.

The call came as the college year commenced and estates surrounding the UL campus witnessed a trail of destruction after student parties on Monday night.

According to Cllr Hartigan, around 2,000 students attended a party in College Court as the new college year got underway. Footage filmed by the City East representative shows the morning after with broken glass and cans scattered all over the estate and bins overturned.

“There are huge volumes of cars blocking footpaths. Roads, footpaths and cycle lanes are littered with glass. There was a 2,000 person party in College Court and longterm residents and students couldn’t get sleep.”

Gardaí, Cllr Hartigan claimed, couldn’t attend the scene as they were dealing with other incidents.

“We need a large Garda presence in the area and UL need to engage and have an off campus code of conduct as I have repeatedly requested,” he said.

The City East representative explained that there is a high density of HMO (house in multiple occupation) in the vicinity of UL, which leads to a concentration of antisocial behaviour including car accidents, public drinking, drug taking, noise and large gatherings.

He added that antisocial behaviour from young people living in these estates, the majority of whom are UL students, has caused severe difficulties for other residents and property owners, especially throughout the course of the Covid pandemic.

“I have had a lot of discussion over the last year with students, permanent residents and landlords who own and rent houses in the estates close to the University of Limerick, to request that UL implement an off campus code of conduct for students living in these estates.

Cllr Hartigan believes that a written off campus code of conduct handbook could be attached to landlord and tenant leases to clearly set out the direction landlords can take in the event of a breach and the penalties involved.

“Such a system has proved to be very effective in reducing antisocial behaviour in the vicinity of UCC.

A particular issue that landlords have raised with Cllr Hartigan is the safety of students that go up on the roofs of houses in College Court.

“This seems to be a yearly ‘rite of passage’ for students and occurs in fresher’s week, rag/charity week and the final week of term. Unfortunately, the students do not seem to be aware of the dangers of this behaviour and this is one issue that needs to be addressed in a code of conduct.”

In response, University of Limerick said that it has spent the summer planning for a return to as near normal teaching as possible this September, while also recognising the need to keep the community safe.

“UL appreciates that there is understandable concern in the surrounding community about the return of large numbers of young people from across the country. Appeals have been made to those living in off-campus rented accommodation to be responsible and a good neighbour to those around them.

”While UL cannot be a responder to off-campus incidents, which are the jurisdiction of An Garda Síochána and other relevant agencies, any student who has been officially reported, investigated and found to have broken the UL Code of Conduct will face sanction.”