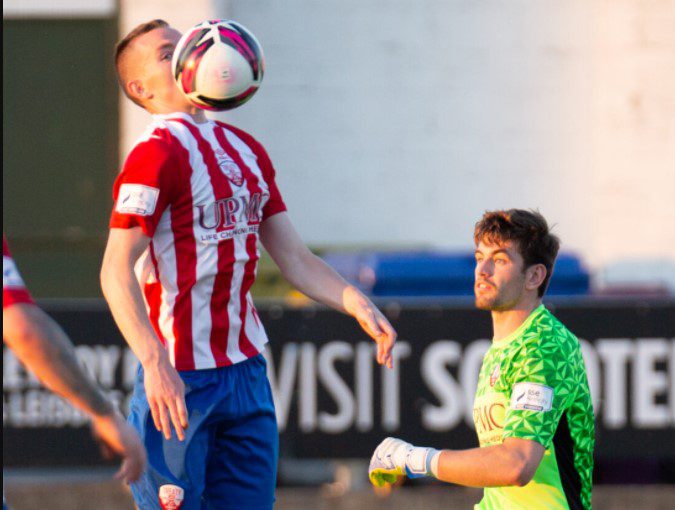 TREATY United make the short trip to Eamon Deacy Park tonight to take on second placed Galway United in the Airtricity League First Division (7.45). There are just five games remaining in the league season and Treaty are currently in fourth place, two points worse off than this weekend’s opponents.

The Limerick side gained their first win in four league games last weekend with a 3-0 victory over Cobh Ramblers. Sean McSweeney opened the scoring in the first half and despite a nervy second period, late goals from Anthony O’Donnell and a cracker from substitute Willie Armshaw secured the all-important win, especially considering the standard of opposition over the next month.

This is the third meeting between the sides and the second at the Galway venue. Tommy Barrett’s side were very unlucky not to leave Eamon Deacy Park with all three points on the last occasion in March after taking an early lead through Ed McCarthy. However, an equaliser deep into injury time from Wilson Waweru broke Treaty hearts in what was one of their best displays of the season.

Galway United were early favourites for league honours before a ball was kicked and despite a slow start, the Tribesmen found their form and John Caulfield has found his preferred team. Former Limerick FC player Shane Duggan was allowed to leave in July as he fell out of favour with Caulfield choosing to play both Conor McCormack and Gary Boylan in midfield and an upturn in results followed.

They are a very physical and direct side with strikers Wilson Waweru and Paraic Cunningham capable of causing problems for the opposing defence. The biggest strength Galway have is their mean defence with the team conceding just 20 goals this season, the second-best record behind champions elect Shelbourne.

The back four is marshalled by Newcastle-West native Killian Brouder who is having a superb second half to the season in which he has added goals to his game, scoring for three games on the trot in recent weeks. Joe Gorman was a big addition from Longford as he achieved promotion with the Midland club last year and Alex Murphy has been a revelation at left-back considering he is just 16 years old.

A huge challenge awaits Treaty against their play-off rivals, but Tommy Barrett insists his side will be going there to win the game.

“We always look to win. We will start with a point but we always look to win games. I thought we were unlucky both times we played Galway. We should have won up there and the last time we played here (at the Markets Field) there was nothing in the game although they got a very good goal. It is going to be very difficult for us as we are coming up against a fantastic side.”

Once again, Barrett’s team selection will be interesting with so many players vying for the midfield and wide positions. Sean McSweeney played as the lone striker and scored last weekend and with Kieran Hanlon also struggling through injury, it is likely that the Foynes man will lead the line in Galway.

Treaty United women’s side were eliminated from the FAI Senior Cup last Sunday at the hands of cup holders Peamount United. Although they produced a valiant display, Niall Connolly’s side succumbed to a 0-2 defeat.

The team’s league form has dipped dramatically in recent weeks and they are now at the foot of the table heading into this weekend’s clash with Wexford Youths. The South-East outfit remain just 6 points behind Shelbourne with a game in hand and it will another tough outing for the Limerick side as they look to arrest the slide.

On a positive note, when the sides met in July, it took an injury time goal to break Treaty hearts and steal all three points for Wexford in a 2-1 win. It was a stellar defensive display from Treaty and similar will be needed on Sunday at Jackman Park (2pm).