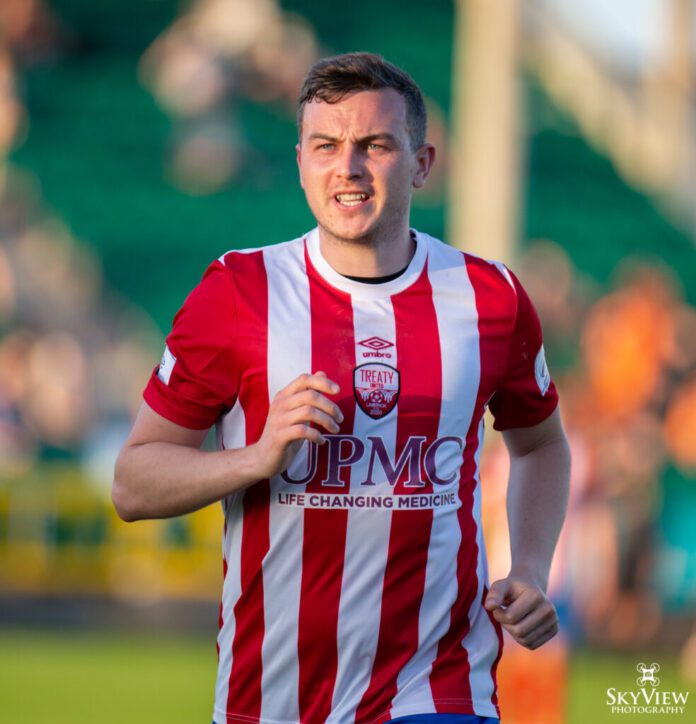 The evening began with a minute’s applause in memory of Sam Oji who sadly passed away a fortnight ago. Oji represented Galway and Limerick FC with distinction over a three year period and the proceeds of programme sales went to the family of the centre-back.

In the opening exchanges, both Kieran Hanlon and Ruairi Keating traded shots but neither troubled either Luke Dennison or Tadgh Ryan. Dennison was making his first start for the home side in the absence of the suspended Conor Kearns.

Tommy Barrett made it clear that he would attempt to match the home side physically and as a result Ed McCarthy dropped out of the team in place of Kieran Hanlon and Sean McSweeney reverted to his usual attacking midfield role.

John Caulfield’s men played in their usual direct manner and crowded the penalty area and goal line at any opportunity from either long throws or corners. It was from one of these throw in’s that Caulfield’s side almost took the lead as the visitors failed to clear and Waweru’s flick was cleared off the line.

The Tribesmen had been in the ascendancy at this stage but following Waweru’s effort, the Limerick side began to grow into the game. Sean McSweeney was dropping deeper to start attacks and the Foynes native picked up possession on the edge of the box before shooting just wide.

Five minutes later, a neat one-two between Charlie Fleming and Clyde O’Connell resulted in the former producing a dangerous cross which was met by McSweeney but he couldn’t direct the header goal wards. The home side responded with Mike Rowe receiving possession from O’Keeffe and letting fly but Ryan was equal to the task.

Just before half-time, centre-back Joe Gorman’s long range effort was spilled by Ryan but just as Waweru thought he had a simple tap-in, the Cappamore native gathered the ball at the second attempt.

The second half was a dull affair with little chances to report. The best chance for the home side fell to Waweru who re-directed Ruairi Keating’s miscued shot towards goal but Ryan produced a superb save to deny the striker.

The turning point of the evening came on 70 minutes when former Galway United player Marc Ludden received a second booking for a foul on Gary Boylan and Treaty were reduced to ten-men. Barrett introduced Conor Melody and Callum McNamara in an attempt to freshen Treaty’s approach and defensive effort.

The impressive Ryan was on hand once more to deny Rowe as Galway pushed for a winner. However, outside of a couple of dangerous crosses , they failed to created a troublesome moment for the visiting defence. In fact, Anthony O’Donnell had a great chance to snatch the win for his side as he rose highest to meet a corner but he got under the ball and headed over.