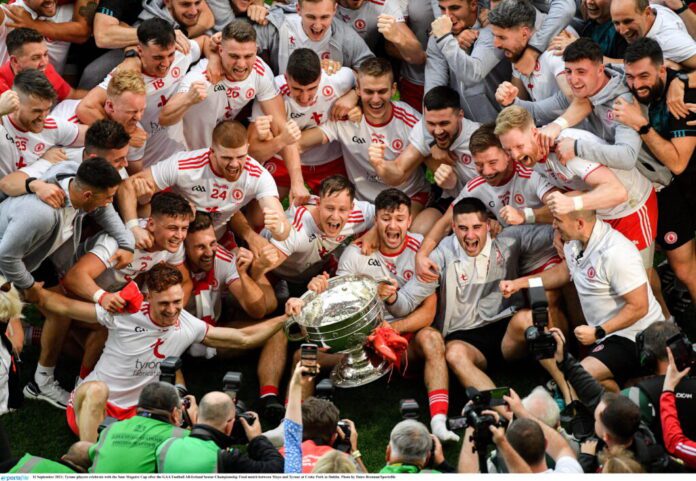 FROM the All-Ireland Football Final to Week 1 of the NFL, here’s a quick summary of all the action from what was a very busy weekend of sport.

A team that very nearly withdrew from the championship all together, are now All-Ireland Champions. Tyrone have won their fourth Sam McGuire trophy, first since 2008, in Croke Park last Saturday after beating fan favourites Mayo.

A flat second half performance from the Maritime county gave way for Tyrone’s lead to stretch. Mayo have been in since 1989, yet their quest for a win remains ongoing.

Galway claimed the O’Duffy Cup for the fourth time last Sunday with a dramatic win over Cork in Croke Park. Both sides were neck and neck until a Cork goal in the 49th minute forced Galway to dig deep in order to regather control of the remainder of the game.

As the game entered its final minutes, Galway outscored Cork by managing to squeeze in a handsome 1-4 to grasp the lead and subsequently the championship.

The Intermediate and Junior camogie finals were also played over the weekend, with Antrim claiming the intermediate and Wexford sealing the Junior title.

The Munster Women’s side have claimed the Vodafone Interprovincial Championship with a stellar performance over Leinster last Saturday. Munster’s performance in Donnybrook tops off a series of dominant performances by the Munster side, leading them to claim their first interprovincial title in three years.

Limerick native Chloe Pearse put in an immense shift in the red jersey, scoring two tries in the game as well as a player of the match award as Munster went on to defeat the then reigning back-to-back champions Leinster.

The iconic Cristiano Ronaldo made his second debut for the premier league club which birthed his phenomenal career in 2003. In their week four match up with Newcastle, Ronaldo found the back of the Newcastle net not just once, but twice.

With his instrumental role in United’s 4-1 thrashing of Newcastle, CR7 will likely be at the centre of Manchester’s future success.

Rugby Championship: Quade Cooper and the Wallabies shock the Springboks

Quade Cooper made his presence felt in his latest stint in a Wallabies jersey, as he led Australia to a last gasp victory over the World Cup champion Springboks.

Although Cooper’s involvement in the Australian national team has been sparse over the past number of years, his performance on Sunday’s Rugby Championship clash with the Lion slaying Springboks has gripped the rugby world.

The 33 year-old slotted 8 kicks from 8, including a nail bitting last minute nudge to seal the game for the Wallabies.

US Open Tennis: Medvedev blocks out boo’s to defeat Djokovic and claim his first major

2021 US Open winner Daniil Medvedev played through the boos of the New York crowd to shatter the dreams of Novak Djokovic’s historic calendar grand slam in straight sets.

On the women’s side of the competition, 18 year old Emma Raducanu became Britain’s first female Grand Slam champion for 44 years. Raducanu put up a stunning 6-4 6-3 success over Leylah Fernandez in a gripping final on Saturday night to become the first qualifier (male or female) to win a grand slam title.

Week 1 of the NFL: Brady begins 2021 Campaign with a win over the Cowboys

Arguably the greatest player to ever touch a football started his 22nd career season on Thursday night in a bid to win his 7th Championship. Tom Brady led the Tampa Bay Buccaneers to a 31-29 win over the Dallas Cowboys in the maiden game of the 2021 season.

Brady threw for a whopping 379 yards and 4 touchdowns but in typical Brady fashion, he was forced to lead a last gasp drive in the games closing minutes to put Bucs kicker Ryan Succop within range of the posts to seal the win for Tampa.

The 36-yard field goal sailed over with just two seconds left on the clock, Dallas fans wept as they watched 44-year old Tom Brady do what he does best. Last years Super Bowl winners are sure favourites to go all the way again this year, and with a quarterback like Tom Brady on the roster, it’s hard to argue against that.

Fun Fact: Tom Brady, in his 22 years in the NFL, has never lost to the Dallas Cowboys.