A 20-year multi-million euro plan, to develop up to 2,800 “affordable homes”, parklands, commercial spaces, and sustainable transport links on State lands, in the heart of Limerick City, was launched this morning.

The minister for housing, darragh O’Brien said the plans would allow people “who are struggling to save or pay rent, to be able to have an opportunity to be able to own their own home, where the State is going to support them to do so”.

The project, funded by government, and led by the Land Development Agency (LDA), aims to transform 50 hectares of state-owned lands along the Limerick rail network, centred around Colbert Rail Station, and incorporating new urban districts.

Launching the plans, which are open to public consultation until November 11th, the Minister for Housing, Darragh O’Brien, said it was “the first time a government have brought forward a multi-annual housing plan that’s actually funded” and the project, if passed, will take twenty years.

Mr O’Brien said the government have committed to releasing €20bn between now and 2026 to fund new social and affordable homes in the state.

The area, which already boats a new €3.5m pedestrian plaza, recently built in place of an old carpark outside the city’s rail station, will see a “transport orientated development, and a vibrant mix of homes, landmark buildings, unique pedestrian and cycling infrastructure, employment space and and play areas” as part of the proposed Colbert Quarter plan.

An “exciting feature of the plan is a proposed new raised pedestrian walkway, cycleway and public realm space” connecting Colbert Station to the rest of the city.

The majority of the lands that have been earmarked for development are owned by CIE and the HSE.

John Coleman, chief executive of the LDA said its objective is “to ensure the delivery of housing and supporting development on underused state land, to transform a city”.

However, the fanfare of the launch of the plans was interrupted by a number of local businesspeople, who informed minister O’Brien that his party’s priority should be to tackle anti-social behaviour in the area before more houses are built.

They claimed the pedestrian plaza is a haven for vagrants and that the area around Colbert Rail Station has become a toilet. 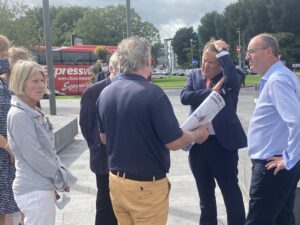 Mark Lennon, who runs a local grocery shop, told Minister O’Brien: “Where you are standing now this minute is a den of inequity, and you’re talking about putting in a beautiful housing estate, and the children of that housing estate will end up here, if you don’t clear it up.”

“I’m fighting for, I don’t know how long, and I’m getting nowhere. You’re standing in a place that is full of winos everyday of the week, and we have asked (the authorities) to clear the area and nobody has given us any help and it’s going on forever.”

Mr Lennon told the minister: “This place has been miraculously cleaned up this morning.”

Minister O’Brien said he would raise the matter with authorities in Limerick.