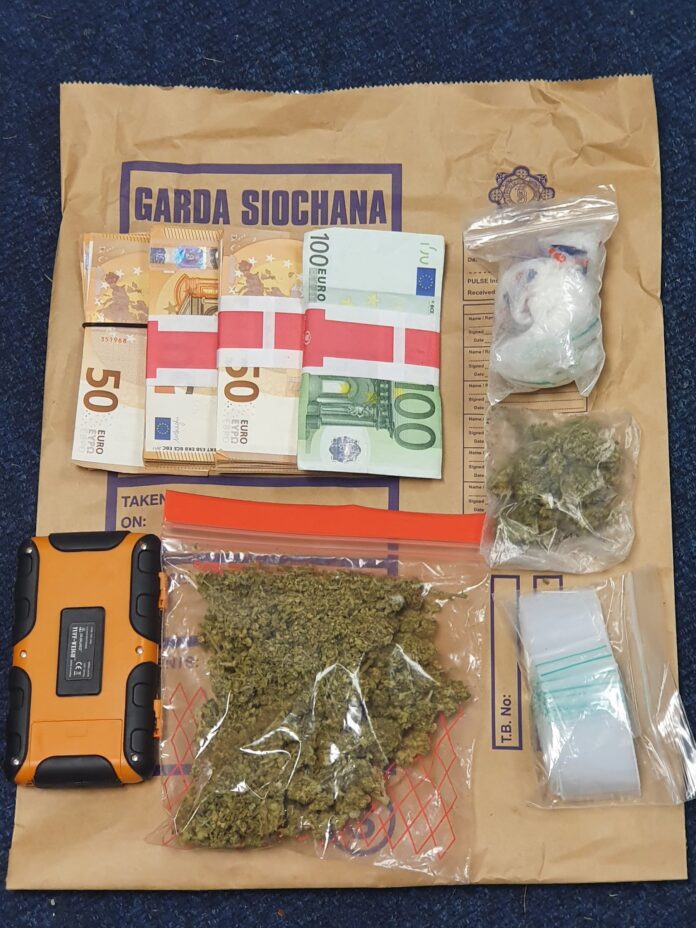 GARDAI arrested two men and seized cash and suspected drugs this morning, in a planned Garda operation targeting the sale and supply of drugs in the town of Kilmallock, Co Limerick.

The operation, led by Bruff gardaí, and assisted by an armed unit, dog unit, and drug squad, was part of a response to violent clashes between rival groups in the town, last week.

“Gardaí from Bruff have seized cash and drugs and arrested two men as part of ongoing investigations targeting the local sale and distribution of illegal drugs and related criminal activity in Kilmallock, Co Limerick,” said a Garda spokesman.

“The drugs were recovered during searches of two houses in Kilmallock by Gardaí attached to Kilmallock and Bruff assisted by the Divisional Drugs Unit, Armed Support Unit and the Canine Unit this morning, Sunday, 19t September, 2021. “

“Quantities of suspected Cocaine €800 and Cannabis €800 along with cash €6,500 were seized. The drugs will be forwarded to FSI for analysis.”

The two arrested men, who are both aged in their 30s, were detained for questioning at Bruff Garda Station.

The previous Sunday, September 12, gardai responded to a number of violent disturbances in the town after clashes between rival groups saw a house and cars damaged.

A number of videos circulated online showing groups of men using sticks to break windows in a house, and a voice can heard say the wrong house had been attacked.

In another video, a loud bang is heard, and a woman asks if there are guns present, prompting another female to respond: “There was guns there a while ago because a shot went off.”

One of the women is heard telling a child at the scene of one of the disturbances: “You’re too young to be looking at that.”

Gardai said it had not received reports that shots had been fired.

It’s understood two senior representatives from both feuding groups met and agreed a truce in a church in recent days.

Gardaí are examining videos that have been shared widely on social media, along with CCTV footage.

Gardaí have been “actively patrolling” the town fir the past week, in a bid to keep a lid on tensions between the rival groups.

“A number of Garda units, including the regional armed support unit, responded to public order incidents at approximately 8pm on Sunday, September 12th, 2021 in the Kilmallock area of Co Limerick.”

“The situation was calmed after a period of time,” said the Garda press office.