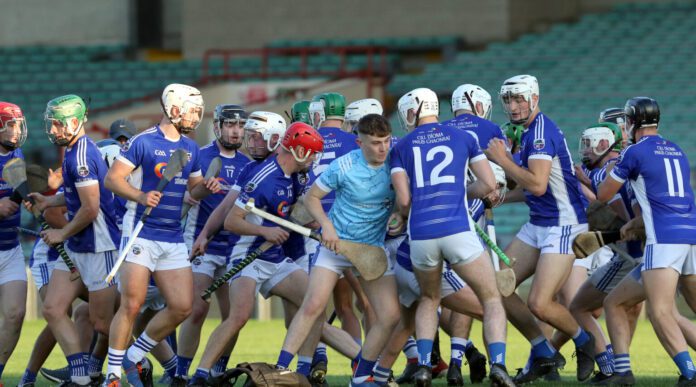 THE first piece of senior silverware will be on offer tonight with the final of County Cup final.

In a bumper weekend of Limerick hurling, the County Cup final between Kildimo Pallaskenry and Garryspillane will kick start proceedings on Friday evening.

The one off game takes place on Friday evening at the newly renamed TUS Gaelic Grounds with a 7.30pm throw in.

For the second consecutive year, the final will be played between sides who didn’t qualify for the quarter-finals but also avoided a relegation decider.

Blackrock are current champions as they beat Monaleen 1-20 to 0-19 last sumer.

Kildimo Pallaskenry will be hoping for a first piece of silverware in the senior ranks after winning promotion last year. KP have taken to life in the senior ranks well and picked up a comprehensive win their opening game against Monaleen, with the five point margin flattering the losing side. KP lost out to Adare in their second game but were competitive throughout.

Their opponents Garryspillane had a similar path to the County Cup, falling to Blackrock in their opening game before overcoming South Liberties in their final group tie, with relegation facing them had they lost.

The most recent meeting of the sides came in the 2018 Premier Intermediate semi-final in Bruff. In their first year at the grade, Kildimo Pallaskenry made an immediate impression and beat the South side in round two by four points in Caherconlish. But in the rematch with a place in the final on the line, it was a reversal of the result with Garryspillane claiming a four point win.

The Bouncers took an early lead with a Dylan O’Shea goal and were buoyed by the sending off of Kyle Hayes a couple of months after he was named man of the match in the All-Ireland final. KP reduced the deficit to a single score with time running out as Garryspillane held out before going on to win the championship, defeating Bruff in the decider.

Since then, Garryspillane have struggled in the senior ranks, picking up just two wins from their nine group games. The Bouncer drew two of their games in the senior ranks in their maiden season at the level while also picking up a win over Knockainey. But last year they found themselves in the relegation final where they overcame Murroe Boher.

As for Kildimo Pallaskenry, they have gone from strength to strength since the semi-final loss to Garryspillane, reaching the PIHC decider twelve months later before losing out to Blackrock after a replay. They made no mistake in 2020, beating Mungret St Pauls 0-22 to 1-13.

However, Garryspillane will be hopeful that the South Liberties win will act as a catalyst for the still youthful side that won back to back premier minor titles in 2017 and ’18.

KP will be favoured but in a one off game this could go either way.

Kildimo Pallaskenry take on Garryspillane in the Limerick Senior County Cup Final on Friday evening at the TUS Gaelic Grounds at 7.30pm.

It is a ticket only event with tickets available for purchase in the link below.