MUNSTER Head Coach Johann Van Graan has named his 23-man squad to take on Scarlets in the third round of the URC.

Johann Van Graan has announced his side to travel to Llanelli in their third round URC clash with Scarlets. The unpredicted selection sees Joey Carbery, Craig Casey, Gavin Coombes and Jean Klein among those rested, while many new names and faces are given their first tase of the URC.

Van Graan has gone with an entirely different front-row than the one selected to play the Sharks and Stormers. Hooker Diarmuid Barron is set pair up with props Jeremy Loughman and Steven Archer, all three getting their first start of the season.

The young second-row pairing sees Thomas Ahern join Fineen Wycherley in the engine room, with Ahern making his first start of the season.

Jack O’Donoghue will captain the side from the blind-side while Chris Cloete and Jack O’Sullivan make up the rest of the back-row at seven and eight respectively, O’Sullivan also set to make his first start of the season.

Neil Cronin will make his first appearance for the club this season as he is named to start at scrum-half, while Ben Healy is given the nod at 10, making his first start of the season.

Dan Goggin returns to the starting XV but at first centre, he is joined by Liam Coombes who also make his first appearance for the province this season. Coombes is fresh off an impressive two try performance for Garryowen in their AIL opening round win against Dublin University. Coombes makes the move from wing to centre in his fifth ever start for the club.

Wingers Calvin Nash and Shane Daly are the only two players retained from last weeks win over the Stormers, their joined in the back-three by Matt Gallagher at full-back who is also making his first appearance for the province this season.

Kevin O’Byrne returns from injury among the replacements, he is joined on the bench by fellow front-rows Josh Wycherley and John Ryan. RG Snyman retains his place amongst the replacements while academy back-row and former Ireland U20 captain Alex Kendellen is set get his first hit out in the URC from the bench, he is joined by fellow back row Jack Daly wearing 23.

Only two backs will take their place on the bench, academy duo of scrum-half Paddy Patterson and out-half Jack Crowley are given their first senior team nod of the season. Both players will be eager to impress from the bench.

Munster will kick-off their third round clash with Scarlets at 2:00pm, the game will be live on on URC TV RTÉ, S4C, Premier Sports & SuperSport.

Take a look at the full team list below:

The post TEAM | Munster side to take on Scarlets announced appeared first on Sporting Limerick. 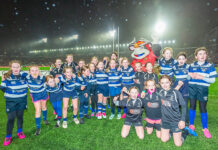