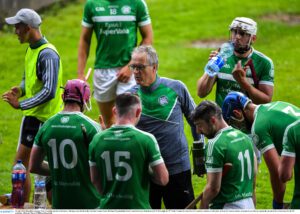 KILMALLOCK booked their place in the Limerick Senior Hurling Championship with a win over Doon in the TUS Gaelic Grounds on Sunday.

For the second successive week, Oisin O’Reilly was named man of the match as Kilmallock sealed their place in the SHC final for the first time since 2017.

O’Reilly heled Kilmallock into a six point lead at the half with three from play. He grabbed two goals in the second, including the crucial fourth as Kilmallock ran out 4-20 to 2-16 winners against the East side.

Reflecting on the game, O’Reilly spoke about the importance of reaching the final, with only a few survivors from the 2014 side that claimed Munster honours, the last year the Balbec won the Limerick championship.

And with the team vastly improving on their opening two appearances this year, O’Reilly says his side are going in the right direction.

“Delighted to be back in a county final again, we’ve taken it one step further than we did last year and we got another one over Doon.

“That’s what you’re training for, year in and year out, to get to a county final and go on and win it and hopefully we’ll give that a right lash in two weeks time.

“Game by game we’re getting better and better, hopefully we’re coming to the right time to be at the top of our game in two weeks”

Watch the interview with O’Reilly in full below.