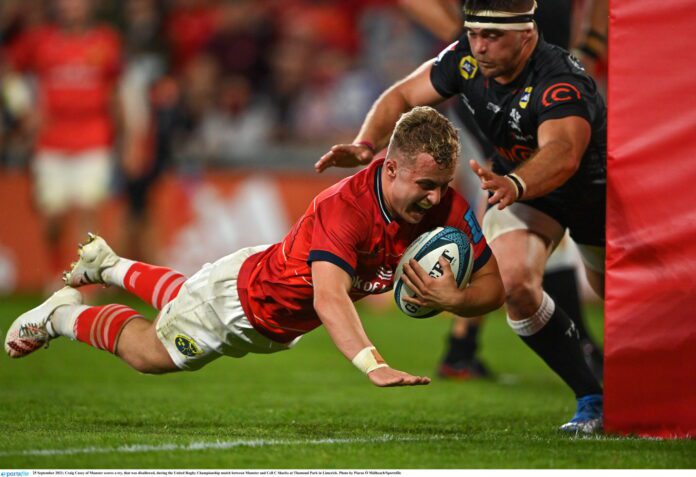 14 changes have been made to the side that defeated Scarlets in last weekend’s URC fixture, However Munster face a more familiar foe in the form of Connacht who return to Thomond Park having beaten Munster in their most recent fixture at the same venue.

In the back-row, Peter O’Mahony captains the squad from the blind-side while Chris Cloete is given the nod at 7 after his masterclass performance against Scarlets last weekend. The inevitable Gavin Coombes returns to the number 8 position.

In the backs, Craig Casey continues to bond with Joey Carbery as the pair are once again named in the scrum-half and out-half positions respectively.

Van Graan continues to asses his options in the midfield, reusing the combination from Munster’s round two game against the DHL Stormers with Rory Scannell and Keith Earls named at 12 and 13. Mike Haley returns to full-back while Munster’s maestro’s Simon Zebo and Andrew Conway make up the back-three.

Last weekend’s starting front-row of Diarmuid Barron, Jeremy Loughman and Stephen Archer start from the bench this week instead, same goes for last week’s stand-outs Fineen Wycherley and Jack O’Donoghue who are also named on the bench.

Neil Cronin and Dan Goggin are also set to make an impact in the latter stages of the game, while young out-half Jake Flannery gets the nod for the first time this season, concluding the replacements.

Take a look below at both teams for tomorrow’s interprovincial clash below:

Munster v Connacht is set for Saturday 16th October in Thomond Park, with kick-off at 7:35pm.

The post TEAMS | The big guns return as Johann van Graan names his Munster side to take on Connacht in the URC appeared first on Sporting Limerick.