Home Other Horseracing Billy Lee makes it to 45 winners for the season | Weekly... 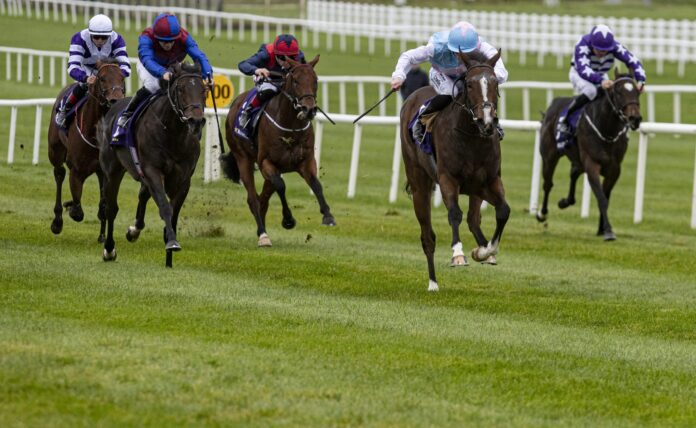 BILLY Lee brought his tally for the season to 45 winners when teaming up with Ken Condon to land the five-furlong maiden on Dancing Rebel at the Curragh on Thursday.

Owned and bred by Shane Molan, the 5/2 chance comfortably held off the Andy Slattery-trained Special Power by score by three-parts of a length with Aidan O’Brien’s 10/11 favourite a length and a half away in third place.

A youngster celebrating at Tramore on Thursday was Cratloe’s Mark McDonagh, who rode the first double of his career on back-to-back winners trainer by Mark Fahey and Sean O’Brien.

The brace took McDonagh’s tally for the season to eight, and he set the ball rolling with success on the Fahey-trained Coolnacritta in the two-mile handicap hurdle.

A late replacement for the injured Mike O’Connor, McDonagh made the most of the opportunity as he brought the strong 11/10 favourite home two and a quarter lengths to the good over the Edward O’Grady-trained 2/1 chance Downthecellar.

It was a little tighter as McDonagh won the mares’ maiden hurdle on the Sean O’Brien-trained Nell’s Well, the 7/2 chance beating Gordon Elliott’s Motown Maggie by half a length.

Chris Hayes set himself up for a very rewarding weekend when riding the final winner of the night at Dundalk on Friday. He completed a double for veteran trainer Kevin Prendergast when partnering 6/1 chance Bears Hug to success in the six-furlong handicap.

The Erindale Syndicate-owned three-year-old led inside the final furlong to beat 5/2 favourite Plezantlysurprised by half a length.

Hayes was the star performer at Naas on Sunday where he rode three winners in a row to bring his season’s total to 54 winners, just three short of his highest tally of 57, set in 2018.

Dermot Weld supplied the first of them in the near six-furlong maiden where Pearle D’Or, owned and bred by Moyglare Stud Farm, made a winning debut. Hayes brought the 13/2 chance from off the pace to beat the Michael O’Callaghan-trained El Magnifique by two and a quarter lengths.

It was a little tighter as Hayes and Noel Meade combined to win the valuable Irish EBF Auction Series Race Final over seven furlongs with 7/2 shot Lady Of Inishfree. She readily held the late run of the Ger Lyons-trained 11/4 favourite Corporal Violette to win by half a length.

The Hayes treble was completed by the Meade-trained Elysium which scored a near-identical success in the Listed Garnet Stakes. In the famous George Strawbridge colours, the 9/1 shot saw off Joseph O’Brien’s Emphatic Answer by the same margin.

Charles Byrnes landed a notable success at Cork on Sunday where Poseidon landed the €40,000 coopsuperstores.ie Handicap Chase. Another big winner for Sean O’Keeffe, the 7/2 chance was nicely clear when far from fluent over the final fence.

He raced away to a three and a half-length win over the John Ryan-trained Grange Walk in the colours of owner Martin White. Byrnes said, “the handicapper gave him a chance. I’d say two-mile chases will be his job and good to soft ground is ideal. Sean is going very well; he is a great rider.”

The post Billy Lee makes it to 45 winners for the season | Weekly Racing News appeared first on Sporting Limerick.