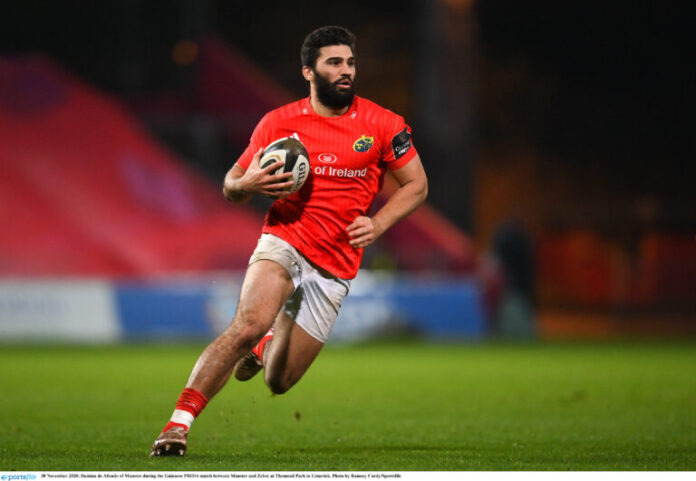 SOUTH African centre Damian De Allende returns to full team training this week after a lengthy international break for the Rugby Championship which saw he and the Springbok’s conclude with a win over the All-Blacks.

Training resumed at Munster’s high performance centre on Monday in preparation for Munster’s fifth round URC clash with the Ospreys at Liberty Stadium this weekend.

Centre Rory Scannell was removed from play during Saturday’s game against Connacht due to a head injury, he will undergo the return to play protocols under the supervision of the Munster medical department.

Prop Keynan Knox has returned to team training this week since recovering from a hip injury, while his fellow front-row James French has returned to modified training. Second-row Thomas Ahern is unavailable due to illness.

De Allende and the Springbok’s fell short on two occasions to a tantalising Wallabies side led by Quade Cooper, the World Champions ended the tournament on a high after a nail biting victory over eventual winners the All-Blacks.

Players who remain unavailable are lock RG Snyman who continues rehab on his ACL injury, scrum-half Rowan Osborne who’s addressing a head injury, lock Jason Jenkins with a thigh injury, prop Roman Salanoa with a knee issue and Ireland centre Chris Farrell who is in the latter stages of an abdomen injury.

Munster face Ospreys at Liberty Stadium in the fifth round of the URC on Saturday October 23rd, with kick-off at 7:35pm.