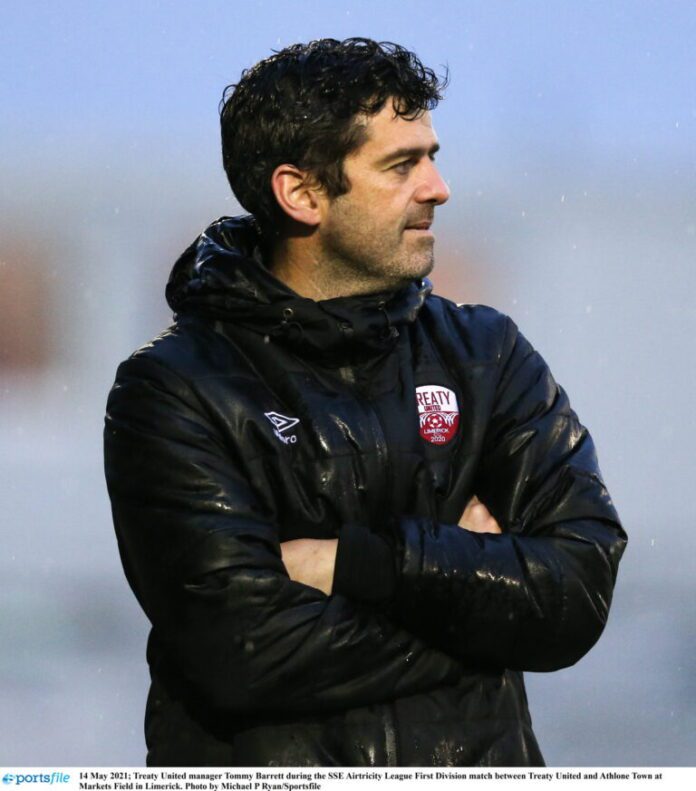 TREATY United have reached the Airtricty League First Division play-offs in the club’s maiden season in senior men’s football following a 1-1 draw with Athlone Town at the Markets Field on Friday night.

Tommy Barrett’s side surprised many this season with brilliant displays and consistent performances throughout the campaign to secure a position in the division play-offs.

Against Athlone, the hosts had trailed by a goal up to the last quarter of the game until they were awarded a penalty. Kieran Hanlon dispatched the spot kick with composure to gain a valuable point for the Limerick side. One that sees them achieve such unlikely success in their debut season at this level.

Barrett and his men will now shift their focus into preparation for the knockout games that will decide their faith for next season.

Speaking after the tightly contested game, Tommy Barrett praised his side for their performance and season as a whole as he stated:

“I said from the start we’d take it game by game and we definitely didn’t envisage this, the lads have been fantastic… they thoroughly deserve it.

“We did ok in the first half… I thought the second half we were the better team bar the first five minutes, so I think we thoroughly deserved the draw.”

Hailing his players, Barrett mentioned the cool, calm composure and maturity shown by his side during the past season, mentioning the improvement shown by his squad week after week, showing more ambition, fight and determination with every game played as he said:

“We haven’t lost here all year, we only lost to Galway with a good goal by Galway and we’ve lost to Cabinteely, so I don’t think we can label this group of players to be bottlers, I think we’ve proved that in games since.”

Watch Barrett’s interview in full below.

Also hear from goalscorer on the night Kieran ‘Red’ Hanlon who spoke about the sides campaign and his own personal journey with the side.