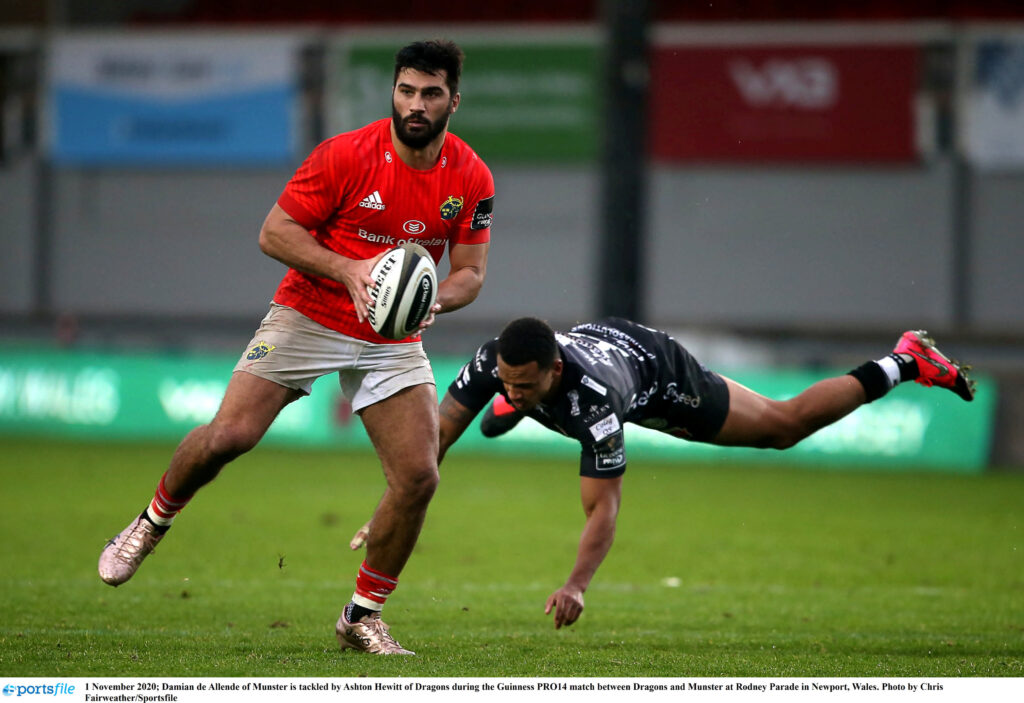 SPRINGBOKS centre Damian De Allende and former British and Irish Lions captain Conor Murray have retuned to Munster this week after a lengthy international stint in the Lions series and Rugby Championship.

Both players have taken time off for rest and recuperation and are now available for selection by Munster head coach Johann Van Graan.

“Conor has been training with the group same as Damian and we’ll make our decisions later in the week wether we will select him but he is looking really well, refreshed and training has been going well.” Munster head coach Johann Van Graan said.

Murray was at the centre of the summer Lions tour to South Africa where the tourists lost two of the three test matches against the world cup winning Springboks, he was even captain of the squad during the injury forced absence of Alun Wyn Jones.

Now back reporting for club duty, the Limerick man is in line to make his first appearance for Munster this season against Ospreys in the fifth round of the URC. If selected for the away fixture, the scrum-half will make his first appearance for the province since their Rainbow Cup loss to Connacht in Thomond Park where Murray started from the bench.

However his return to Munster colours this weekend is anything but certain, with Van Graan reiterating his form-based selection approach, Murray will have to perform in training over the next few days in order to prove to his head coach that he’s ready to return to action.

Lions series winner De Allende has done anything bust rest over the past number of months. Having played against his club teammate Murray in the three Lions test matches with the Springbok’s, the centre followed the draining three test series with a gruelling Rugby Championship.

The Bok’s played a total of six games throughout the tournament, clashing with each southern hemisphere nation twice in back-to-back games. Despite two shock losses to a Quade Cooper led Australian side, the world champions finished the tournament on a high with a nail biting victory over the formidable All Blacks.

“You just have to look at his performance in that last test for South Africa against the All Blacks and how good he was, whether it is in carrying or tackling or post-contact skills, his decision-making. It’s great to have him back, that’s why we signed him and why he’s such a big part of our plans.” Johaan van Graan added.

De Allende has made a signifiant difference to the Munster midfield since making his debut for the province in August of 2020, however the world cup winner’s contract with Munster is up in June of this year.

Being the caliber of player he is, there will undoubtedly be a number of clubs attempting to sign the centre in June. Since DDA’s contribution to the club is so significant, Van Graan will make his future at Munster a priority when negotiating a new contract.

Both De Allende and Murray are likely to return to action this weekend when Munster face Ospreys at Liberty Stadium in the fifth round of the URC on Saturday October 23rd, with kick-off at 7:35pm.

The post Boost for Munster as the return of De Allende and Murray looms appeared first on Sporting Limerick.