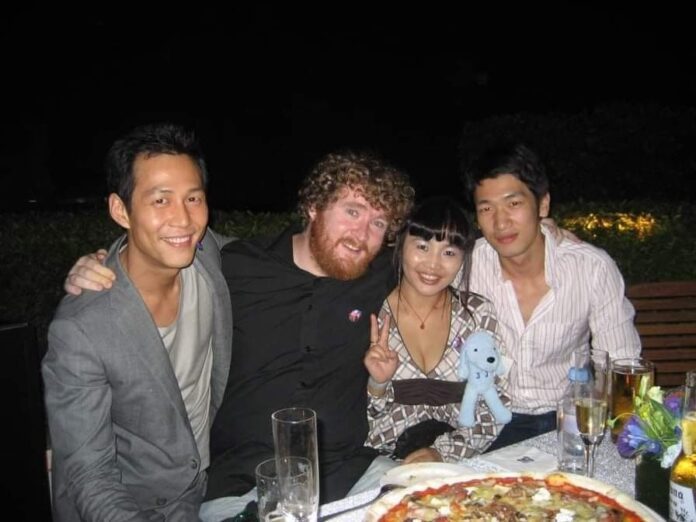 AS THE dystopian Netflix series ‘Squid Game’ takes the world by storm, a Killaloe man living in South Korea has revealed his personal connection to the show.

Stephen McKeogh, who lives on Jeju Island with his wife Mira and sons Seanie and Oscar, recently revealed on social media that Lee Jung-Jae, who plays the main protagonist Seong Gi-Hun, is one of his former students.

Stephen first met Player 456, known to him as JJ, in 2008 when he was working in Dongguk University in Seoul.

He told the Limerick Post: “The university is famous in Korea for its performing arts department. Several well-known Korean actors and directors attended there. JJ was an ex-student in the university and was looking for an English tutor. I was offered a job tutoring him but I didn’t know who he was.

“I was teaching him for a few weeks before I brought up the subject of what he did. He said he was an actor and we just carried on. It wasn’t until I was at home one evening watching TV and saw him on a movie called Typhoon, that I realised this guy is big news. My girlfriend, now wife, couldn’t believe it. He has been a huge star in Korea since the early to mid 90s.”

Stephen and JJ became friends and he and Mira even attended a number of celebrity events in Seoul as JJ’s guests.

“He was an absolute gent – a sound man! He brought myself and my wife out on a few occasions. One event was amazing; he brought us to a red carpet launch of a new Audi Car in Korea. We went in a limo and on the way in he asked if he could borrow my wife, saying: ‘She will like this!’

“She did – he held her by the hand as they walked down the red carpet through the clicks of the local paparazzi. She loved every minute. It was a proper VIP experience and JJ totally looked after us.”

Stephen continued: “We also spoke about the challenges he faced about being a celebrity and how difficult it could be at times. All in all though, he was a man who was passionate about his craft, humble, kind, funny and witty – teaching him was a most memorable experience.

“It is wonderful that his talents have now been seen all over the world, as I said he was huge here anyway.”

Stephen continued to tutor JJ until he and Mira left Seoul in 2009 to get married and come back to Ireland, however they returned to live in South Korea in 2020. The Clareman has fond memories of his famous pal and hopes they might meet again one day.

“Strangely enough I am now back living in Korea on Jeju Island since last year and hopefully our paths might cross again. I haven’t tried to contact him, I guess I wouldn’t know how but I suppose that’s life, and part of the journey is the wonderful people you meet along the way.

“The fact that I knew him and taught him gives me lots of kudos with my kids in school, many of whom claim I have photoshopped it, but I don’t care. I have those memories and they were great!”