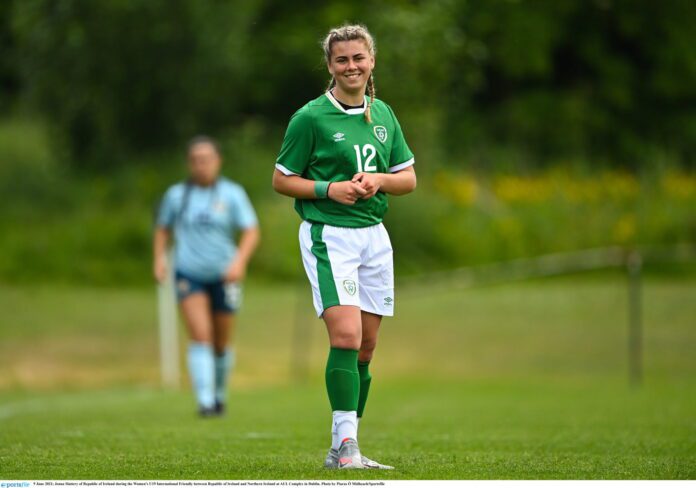 IT was a great occasion at the Markets Field on Wednesday evening as the venue hosted the Women’s Under-19 European Qualification Group 5 meeting between the Republic of Ireland and England.

A sizeable and ferocious home support were treated to an entertaining game but unfortunately for Dave Connell’s side, they somehow came out on the wrong end of a 0-1 defeat despite dominated the game for large periods. An unfortunate own goal from Shauna Brennan in the final quarter was the difference between the two sides.

In what proved to be a very tentative opening for both sides, England attacking midfielder Lucia Kendall cut in off the right before producing a left-footed shot which sailed over the crossbar. Moments later, courageous defending from both Della Doherty and Shauna Brennan denied both Lucy Watson and Agnes Beever-Jones who produced vital interceptions and blocks in the penalty

Five minutes later, Ellen Molloy and Rebecca Watkins both fashioned shots for Dave Connell’s home side but they failed to trouble Khiara Keating in the English goal.

There was more than one Limerick link to the Irish team with former Treaty United midfielder Aoife Horgan, who was recently awarded a scholarship in America, and the winger dribbled past Lucy Parry before teeing up Ellen Molloy who skied an effort from the penalty spot.

The home side were beginning to dominate proceedings now and Kellyann Brown drove in-field from her left-wing position before firing wide. Just a minute later, another good move down the right resulted in playmaker Molloy forcing a brilliant save from Keating from range.

As the half-time whistle neared, Ireland should have taken the lead as Brown seized upon an English mistake in midfield before playing a beautifully waited pass to the onrushing Rebecca Watkins who kept her composure, but Keating was equal to the task to thwart her counterpart.

Ireland began the second period brightly and picked up where they left off as Watkins was causing centre-back pairing Tara Bourne and Ruby Mace all sorts of problems. Firstly, she curled an effort just wide before another barnstorming run allowed her to pick out teammate Horgan at the edge of the area, but Keating once again denied the Irish with a superb diving save.

A cleverly worked free-kick routine involving Molloy, Brennan and Jesse Stapleton resulted in the latter shooting straight at Keating. The lively crowd always feared a sucker punch as the away side began to grow into the game and it arrived with ten minutes to go as Freya Gregory’s dangerous in swinging cross was directed into her own net by Shauna Brennan.

Ellen Molloy tried her best to lift spirits but her deflected cross was eventually cleared by Lucy Parry at the back-post. Although tow attacking substitutions were made in attempt to rescue the game, England held on for victory. Ireland will now turn their attentions to facing Switzerland on Saturday at the Garryowen venue. The Swiss opened their campaign with a 3-1 victory over Northern Ireland.