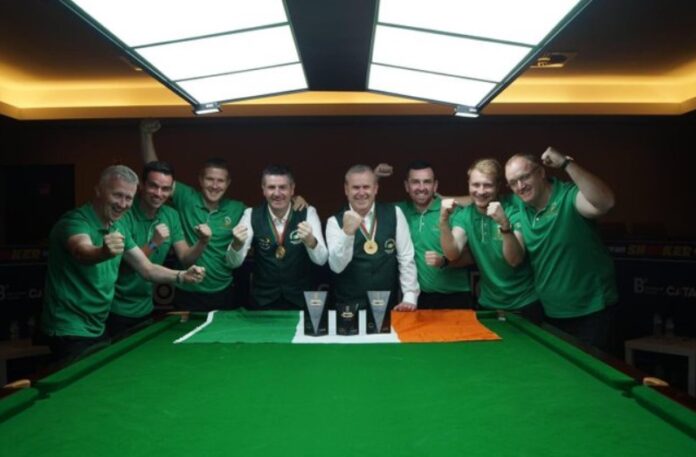 THE duo representing Ireland, Sarsfield and Tuite fended off a stern challenge from Malta which finished 5 – 3 at the EBSA European Team Snooker Championships at the Vidamar Hotel Resort in Albufeira, Portugal.

The Irish duo of Frank Sarsfield and Mark Tuite were victorious in the Seniors Team Championship following a 5-3 success over Malta’s Duncan Bezzina and Philip Ciantar.

The Limerick pairing had lost out to the Malteese duo in the round robin phase but made up for it in the final.

Sarsfield, who was a finalist in the individual seniors event a few days before, and his partner, former European Masters champion Tuite, beat out the tough competition of Finland, Republic of Ireland 1 represented by Dylan Rees and John O’Sullivan, and Northern Ireland to reach the final.

The opening six frames in the title match were split resulting in both sides sharing the lead, but Sarsfield chalked up frame seven and Tuite frame eight to earn the gold medals.