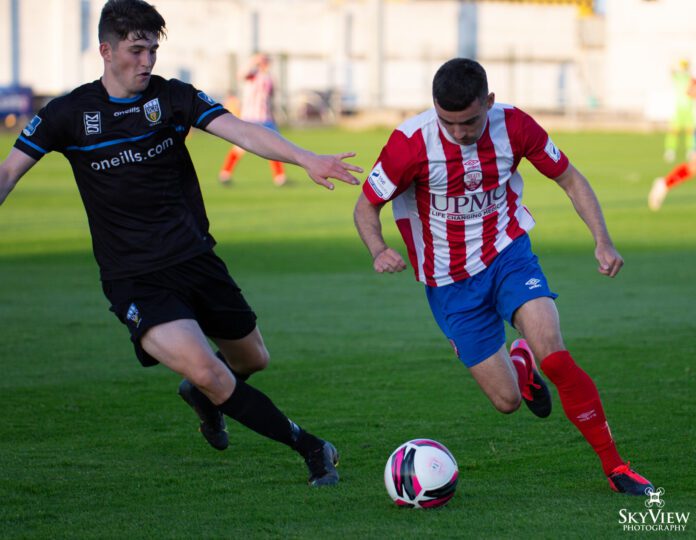 TREATY United succumbed to a 2-1 defeat at the hands of possible play-off opponents UCD at the Belfield Bowl on Friday night. A Liam Kerrigan brace either side of Dean George’s first goal for the Limerick side gave Andy Myler’s team all three points. It was Treaty’s second defeat at the Dublin venue this season.

UCD were quicker out of the blocks and Sam Todd’s early header forced a save from Tadgh Ryan. It was a game devoid of chances in the first quarter but the home side took the lead in simplistic circumstances when Todd’s long searching ball was misjudged by Anthony O’Donnell and Kerrigan took it in his stride before firing past the helpless Ryan to score.

Tommy Barrett’s men were struggling to create opportunities although Joel Coustrain and Callum McNamara linked up well before Coustrain’s cross was gathered in the nick of time by Lorcan Healy with George waiting to tap home. Moments later, the creative Sean Brennan forced a good save from Ryan.

On the half hour mark, Treaty were fortunate that the deficit was one goal as Kerrigan’s corner was met powerfully by Todd but his header bounced off the crossbar and behind to safety.

Joel Coustrain was enjoying one of his better displays for the visitors in what has been a frustrating season so far and his pass sent Charlie Fleming away on the right before the former Cork man picked out Armshaw but a combination of Todd and Healy denied the winger. As we approached half-time, Coustrain latched onto a headed clearance from a corner but his lomg-distance shot went wide of Healy’s goal.

Treaty began brightly in the second period and were rewarded with an early goal as the ball broke to McNamara in the middle of the park before the former Newmarket man picked out the run of George who kept his composure before slotting beyond Healy to restore parity.

Joe Collins shot was deflected wide as Treaty were in the ascendancy before introducing both Bryan Murphy and Steven Christopher for goal scorer George and Coustrain.

The home side regained the lead when Liam Kerrigan’s drilled cross was turned into his own net by Anthony O’Donnell from close range. With ten minutes remaining, substitute Adam Lennon drove inside before blasting wide with a right-footed effort as UCD looked to kill the game as a contest.

Treaty went in search of an equaliser and introduced both Matt Keane and Sean Oyibo in an attempt to rescue a point but it wasnt to be for the away side. Missing the likes of Jack Lynch, Kieran Hanlon and Sean McSweeney was difficult but the management team were also afforded the opportunity to give George, Collins and Coustrain much needed minutes ahead of the play-ff campaign.

Barrett’s charges remain two points ahead of Bray in fourth place but the race for a fourth place finish will go down to the last game of the season. The Limerick side travel to Stradbrook to take on Cabinteely while Bray travel to take on Wexford.

The post Treaty Narrowly Lose out To UCD appeared first on Sporting Limerick.