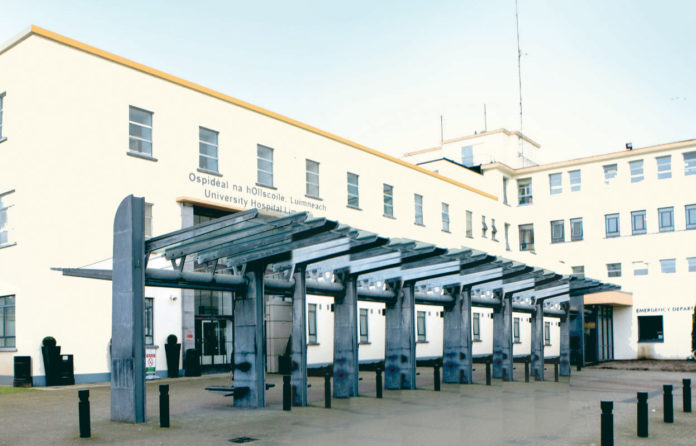 SOME 69,000 people are currently awaiting care across hospitals in the Mid West region, according to figures released by the Irish Hospital Consultants Association (IHCA).

The consultants’ group is calling for urgent government action to tackle the backlog, as it reveals that over the past six years, nearly 31,000 people have been added to outpatient waiting lists at hospitals in the Mid West – a 113 per cent increase.

The inpatient/day case waiting lists in the UL Hospitals Group have increased by a third over the same period, with a total of 6,075 patients.

The IHCA also says that University Hospital Limerick has the second highest outpatient waiting list in the country, increasing nearly three-fold since 2015 to over 48,000 people.

The organisation cites the “consultant recruitment crisis” in the region’s hospitals as the root cause of delays in providing care, with around one in three permanent consultant posts vacant or not filled as needed.

IHCA President Prof Alan Irvine said: “The severe shortage of consultants across the UL Hospitals Group is the main contributor to the unacceptable delays in providing care to patients in the Mid West region. Meeting the healthcare needs of the 69,000 people currently waiting to be assessed or treated by a consultant at hospitals within the group will only be possible by urgently filling these vacancies and expanding the region’s hospital beds, operating theatre and other essential hospital facilities now.”

Some of the longest waiting lists across the UL Hospitals Group are for routine, planned care particularly in Orthopaedics, ENT, Ophthalmology, Dermatology, Urology, Gynaecology and Cardiology, as well as General Surgery.

UHL has also experienced some of the worst overcrowding seen nationally in recent weeks with a total of 1,080 patients treated on a hospital trolley up to Friday October 22.

Professor Irvine added: “Growing waiting lists demonstrate the impact of years of consultant shortages and underinvestment in capacity across these public hospitals.

“We have a chronic recruitment and retention crisis with one in five permanent hospital consultant posts across the country and around 31 per cent in the UL Hospitals Group either vacant or filled on a temporary basis.

“The increases in patient waiting lists and the number of permanent consultant posts that need to be filled have arisen due to flawed Government policies despite the dedication and hard work of consultants, management and all staff in the UL Hospital Group.”

In response, a spokesperson for UL Hospitals Group told the Limerick Post that the surge in waiting lists could be attributed to the national response to Covid-19, as well as this year’s cyberattack on the HSE and the ongoing high number of presentations to the Emergency Department.

The spokesperson added that the Group is working to manage waiting lists across a number of fronts, including the ongoing recruitment of consultants,  “in addition to the referral of urgent surgical and medical cases to the National Treatment Purchase Fund, and the Private Hospital Safety Net Service Agreement”.

The spokesperson continued: “Currently, UL Hospitals Group has a total of 212 approved permanent consultant posts, of which 19 are vacant. Of these, 12 are new posts that have been approved within the past 12 months.”
According to the spokesperson, the Group is seeking to recruit a further 35 consultants through a pilot local recruitment process, which has halved the amount of time taken to appoint a consultant from two years to 12 months.
Since 2019, 22 consultants have been appointed to permanent posts through this process.