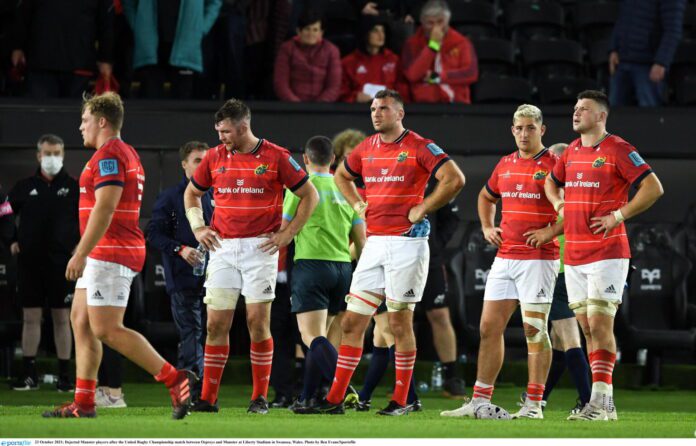 MUNSTER fell to an 18-10 loss to Ospreys in the fifth round of the URC last Saturday, ending their winning start to the season.

Munster travelled to Swansea last weekend to face a familiar rival in the Ospreys. Having enjoyed a convincing victory over Welsh side Scarlets in Munster’s only other away fixture, there was a sense of comfort surrounding the eventual result of the clash.

A Munster loss however, was far from assumed prior to the game.

Munster’s lack of discipline and their impairing penalty count opened the door for all of Ospreys 18 points. To make matters worse, further issues with the games most fundamental elements such as the scrum and line out made it ever more difficult to gather momentum or create a foundation for a productive attack.

Below is an analysis of what went wrong and what went right during Munster’s first URC loss to Ospreys.

Munster’s first URC loss was expected to come as a massive upset in a dramatic fashion, however it resulted in something quite different. Due to injury and international duties, Ospreys were left with less options with regards to their attack, such as the omission of George North, Gareth Anscombe and even Justin Tipuric.

Ospreys realised that the best way to get points on the board was not to attempt sophisticated attacking set pieces with the players available, but to slowly chip away at Munster by punishing any infringements within kicking distance. Instead of kicking to the corner in hopes of producing a try, Ospreys out-half Stephen Myler would take his three points every chance he got, regardless of how mundane or uninspiring that tactic may appear.

Throughout the 80 minutes, Munster conceded 12 penalties in comparison to Ospreys’ 10. Despite only conceding two more than their opponent, the penalties Munster did concede were in substantially more vulnerable sections of the field where Myler could kick from.

Rather than the Ospreys attack being responsible for their points scored, instead it was Munster’s indiscipline, which resulted in the visitors simply gifting points to their opponents.

Munster’s Jack Crowley was given his first starting shift in the URC season so far and he showed some very positive signs before being substituted for Ben Healy. There’s no doubt that Crowley can excel in many aspects usually attributed to a productive out-half, such as kicking for goal, touch and territory.

In addition to these expectations which he’s already fulfilling, Crowley showcased some unique selling points during his time in the 10 shirt last weekend. Some of the best out-halves at club level offer different types of threats and Crowley is no different, The out half poses a running threat to oppositions just as much as he is a kicking one, showing he can exploit space using a variety of different methods.

Despite 10 being Crowley’s favoured position, his skillset can be applied to a variety of different positions across the backline. In fact, the weekend prior to Munster’s clash with Ospreys, Crowley started at the unusual position of fullback for Cork Constitution’s AIL clash with Clontarf.

Despite the loss, the characteristics Crowley did bring to the Munster attack were refreshing. Having a dynamic out-half with a wealth of tools and tricks which he can throw at the defence will always make him a valuable addition to the Munster backline, hopefully for years to come.

Munster’s line-out appeared to worsen this week and because Ospreys focused on capitalising their mistakes, the visitors inadvertently opened the door to conceding possession and sometimes meters when restarting off a line out.

Munster made uncharacteristic errors at the line out when it mattered most, often losing line outs when in the Ospreys 22 and foregoing opportunities from resulting mauls. Johann van Graan’s side also appeared to struggle when defending mauls, resulting in penalties or a further loss of meters.

On the other hand, Munster’s line outs on Saturday became a liability. What was once a long time strength of Munster’s game became flimsy, and brought devastating kick-on affects to their attack.

Similar issues were present at scrum time, even though Munster’s pack weight of 911 kilos would be perceived as an advantage over Ospreys’ 885 kilos, the scrum was perhaps the poorest aspect of Munster’s performance last Saturday. Infringements at scrum time was a significant source of penalties conceded by the Province, with many of Ospreys points coming from the resulting penalty kicks.

The hosts’ out-half Stephen Myler took six penalty kicks for the entirety of his side’s 18 points and maintained a 100% kicking success rate, with the first penalty occurring in the game’s opening minute and the last being in the 71st minute. Needless to mention, Myler is a player you should avoid giving so many opportunities to.

Some of Munster’s front rows were penalised for not driving straight, which resulted in points for Ospreys. Scrums which were Munster’s possession were far from solid, and the resulting possession was sloppy and easier for the Ospreys to defend.

Ospreys’ scrums however were much steadier, making them the perfect foundation for the following phases.

While it’s unrealistic to expect homogenous standards week in and week out, Munster’s line out and scrum woes will hardly go unnoticed by Johann Van Graan and it’s evident that these fixable issues won’t be present in the near future.

The post Talking Points: Crowley the sole shining light in the dark as Munster suffer first loss of the URC season appeared first on Sporting Limerick.