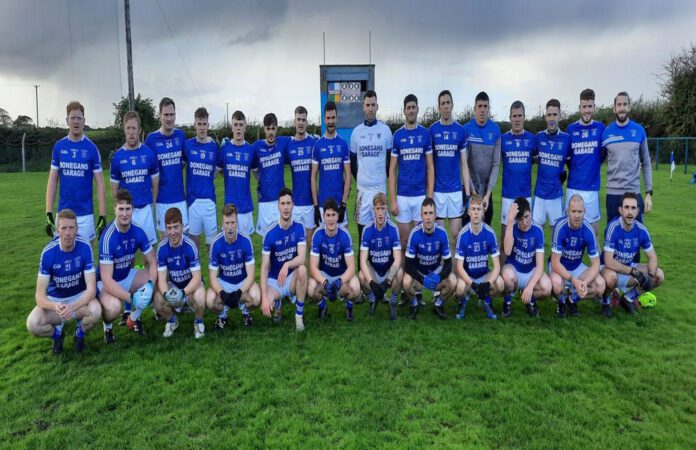 THE finals of both Junior Football Championships were played on Saturday afternoon.

Fr Caseys second side ensured that Senior and Intermediate football would be played in the club in 2022 after they overcame Newcastle West in the inaugural Premier Junior Football Championship final.

In the end the margin was 2-8 to 1-7 in Caseys favour as they denied the Magpies a Senior and Premier Junior double.

Jamie O’Connor kicked the Abbeyfeale side into an early lead before Newcastle West turned the tide with Thomas Quilligan’s goal helping them to move into a four point lead. O’Connor replied with three more as Caseys reduced the deficit to two after 20 minutes.

Newcastle West had a brace but two in response from John Lane left it at 1-5 to 0-7 in Newcastle West’s favour at the half.

O’Connor drew level after the restart but Newcastle pulled ahead once more. Then the Abbeyfeale outfit turned the contest with a pair of goals in three minutes.

That had Caseys 2-8 to 1-6 ahead with over a quarter of an hour to play. And while they didn’t score again, they restricted their opponents to just one more score to take a four point lead and promotion to the second tier.

Prior to Caseys coronation, Feenagh Kilmeedy were crowned Junior A Football Champions after they overcame Camogue Rovers in Mick Neville Park.

The West side got off to a flying start and were six points clear before their opponents got off the mark.

Camogue got off the mark with a free after 24 minutes but O’Gorman replied. Camogue hit back with another score but O’Gorman was on hand again with David Boyce rounding out the first half scoring.

Camogue’s response was emphatic at the restart as four on the bounce had them within three with twenty minutes to play.

Feenagh Kilmeedy stemmed the tide with a pair of scores with the sides then exchanging scores on 22 minutes with the West men holding a 1-9 to 0-8 advantage.

That was to be Feenagh’s final score as a pair from Camogue moved them within two in injury time.