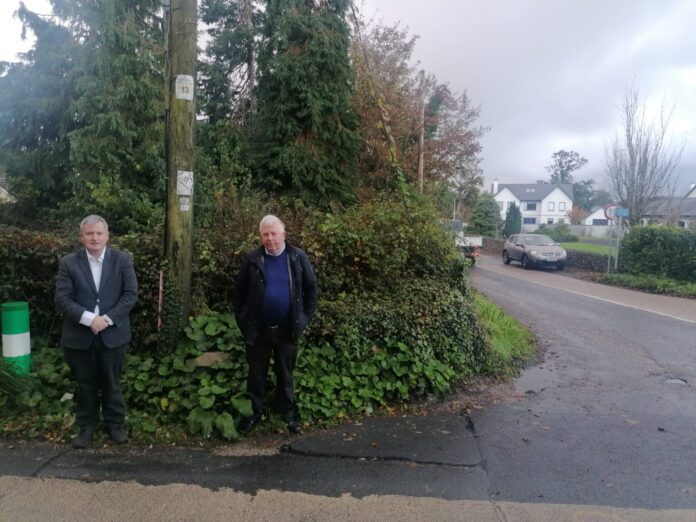 LIMERICK City Fine Gael TD Kieran O’Donnell along with his Fine Gael colleague and Castleconnell-based councillor Michael Murphy have secured works to improve the safety of the “dangerous” Nelson’s Cross in Castleconnell.

The public representatives say they have been working on the project, located on the O’Briens Bridge road (R525), for some time.

The road safety project involves specific works to be carried out by the ESB and Limerick City and County Council.

“Along with my colleague and Castleconnell based councillor, Michael Murphy, we have been working with Limerick City and County Council and the ESB over a long period of time to improve the safety at the very dangerous Nelson’s Cross, located on the O’Briens Bridge road, the R525 at the entrance to Castleconnell Village. This very dangerous junction has continued to be a location for car accidents, even as late as last Thursday.

“In early August, following ongoing discussions, we held meetings on site with the ESB and the Council to consider the best options to improve the safety at Nelson’s Cross. It was agreed that there were two elements needed here, with the first being to significantly improve the sightlines for vehicles approaching by removing an ESB Pole on the right hand-side of Nelson’s Cross on the approach road from Castleconnell village and improving the lighting here also. The ESB are now arranging to have these works carried out in early December and I would like to thank and acknowledge the residents living at Nelson’s Cross for facilitating these critical safety works.

“The second element involves improving the safety of the overall junction itself, with these works to be carried out by Limerick City and County Council. We believe that every possible safety feature must be considered as part of addressing the clear and recurring safety issues at this dangerous junction. The safety measures currently being considered by the Council include a tabletop to look to reduce the speed of vehicle traffic on the four approach roads to the junction. Furthermore, we believe we must also look at additional measures to ensure vehicle traffic on the R525 road itself adheres to the 60km and 50km speed limits on the approach to Nelson’s Cross.

Limerick City and Council road engineers have confirmed that they have made a ‘Safety Scheme’ funding application to the Department of Transport to carry out the safety works.

“Nelson’s Cross has been a constant cause of serious safety concerns and these works to be carried out collectively by Limerick City and County Council and the ESB should significantly improve the safety of this dangerous junction. Furthermore, it is important that whatever safety measures are required are put in place here, we must get this right.”