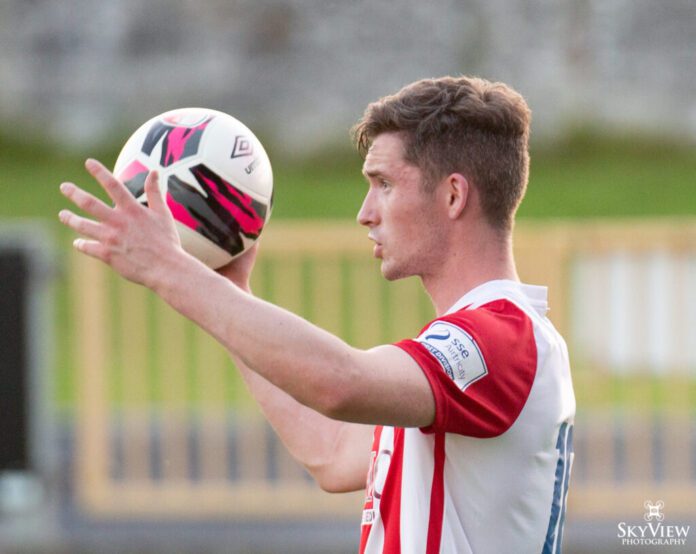 TREATY United endured a disappointing 0-3 defeat in the first-leg of the play-off semi-final against UCD at the Markets Field on Wednesday night. A first half goal from Paul Doyle was followed by a brace late in the second half by Colm Whelan which effectively seals the Dubliners passage to the final of first division section.

Treaty were dealt a blow in the lead up to the game with the news that creative midfielder Sean McSweeney was only fit enough to make the substitutes bench and Clyde O’Connell partnered Mark Walsh in midfield with Jack Lynch playing in amore advanced position. Both Matt Keane and Steven Christopher get the nod in the highly coveted positions on the left and right flank.

In the first 30 minutes, it was tentative affair with Treaty looking to frustrate a UCD side who were assured in possession without creating clear openings. In the 9th minute, Tadgh Ryan’s punched clearance from a corner fell to Paul Doyle at the edge of the box but the winger’s shot sailed over the crossbar.

10 minutes later, Treaty midfielder O’Connell opened up his body well but his he dragged a shot wide of Lorcan Healy’s left-post. There was little to separate the sides and you felt a mistake from either side might create an opening and that is exactly what occurred just after the half hour mark. Ryan has been immense between the sticks for Treaty this season but he misjudged Doyle’s floated free-kick and in an attempt to punch the ball clear, he could only help the ball on its way towards the goal as the visitors took the lead.

At the beginning of the second period, winger Liam Kerrigan showed great skill to trick Sean Guerins before blazing over from the edge of the area. As we approached the hour mark, Andy Myler’s side were in the ascendancy and had two further chances to extend the lead as Harvey O’Brien’s shot was blocked by Anthony O’Donnell. Moments later, Ryan produced a big save to deny Sean Brennan’s well struck volley from going into the net.

In an attempt to swing the game back in the home side’s favour, manager Tommy Barrett made two changes as he introduced Dean George and Sean McSweeney in place of Kieran Hanlon and Mark Walsh. McSweeney upped the tempo in attack immediately and pulled a shot wide of Healy’s goal.

Treaty conceded a free-kick on the edge of the area and Jack Keaney’s curling effort was pushed away by Ryan with Marc Ludden in place to complete the clearance. With twenty minutes remaining, the home side created their best chance of the game was Steven Christopher’s strong run and pass freed up George who drove a shot inches wide of the post.

It was clear that Barrett and his management team were intent on gaining at least a draw from the fixture as they introduced Joel Coustrain and Willie Armshaw in place of Keane and Christopher. However, disaster struck just a minute after the subs as neat play between Doyle and Dara Keane down the left flank allowed the latter to square the ball to Colm Whelan who expertly slotted the ball beyond Ryan.

As we entered the last minute of injury-time, UCD all but ended the tie as a contest as Whelan picked up possession and drove towards goal before calmly scoring to make it the impossible task for Treaty as they travel to Dublin on Sunday to take on the same opposition at the Belfield Bowl (5pm).